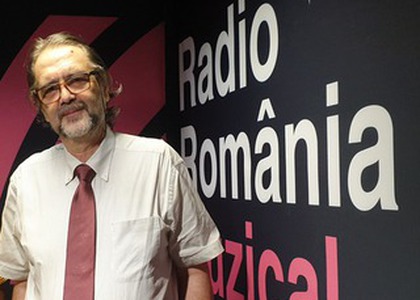 On March 9th, 2021, the online press conference dedicated to the "George Enescu" International Festival was held, where the plans and perspectives of this year's edition of the most important classical music festival in Romania were discussed. The topic was also discussed in the Perpetuum mobile edition the next day, when the Guest of the Week was Mihai Constantinescu, executive director of the "George Enescu" International Festival.

Good evening. Thank you for the invitation!

Thank you for accepting this dialogue. Yesterday, one of the good news from the beginning of this year came at the press conference you organized. The "George Enescu" International Festival will continue in 2021, reaching its 25th edition. What are the coordinates of the festival this year?

The coordinates were established the year before, before the pandemic started, and, as you have seen, the program as presented on our website is a very nice program, very interesting and very daring. We hope that by September things will change and we can start it exactly as we thought at the beginning. Unfortunately, from this programme we had to take out the night concerts precisely in order to reduce the participation a little in terms of the number of people - both artists and the public - because you know very well that Thursday, Friday, Saturday and Sunday at Athens there were two concerts with large audiences. And to avoid these situations we stayed with the four halls - the Palace Hall, the Athenaeum Hall for daily concerts and the Small Hall of the Palace and the Hall "Mihail Jora", where the concerts of the contemporary music series take place.

From the point of view of the program, it was conceived by the master Vladimir Jurowski, the artistic director of the festival, in the continuation of the programs that this festival has had in recent years. I mean, the four important series... The series of great orchestras, in which you will see it is an elite participation, starting from the London Symphony with Sir Simon Rattle, at Concertgebouw Amsterdam. I said the closing and opening concerts, although the opening of the festival will make it the "George Enescu" Philharmonic this year, because it is an already established name of the festival, and together with the Philharmonic "George Enescu" we had some of the most important concerts during the 25 editions. The Israel Philharmonic also appears, the National Orchestra of France, the Mariinski Theatre, the Scala in Milan, Santa Cecilia, the Munich Philharmonic, the Royal Philharmonic, the London Philharmonic... therefore, important names from this point of view of assemblies.

Sonya Yoncheva, if I'm not mistaken, is at her first appearance at the festival, right?

Yes, it's his first presence. We have TrodheimSolistene with cellist Alisa Weilerstein, who is also coming for the first time, a big name at the moment. We also have a special actor who is also coming this time to the festival, as a narrator for two works - Oedipus Rex at the Palace Hall, in a concert of the Mariinski Theatre, and at the concert at the Athenaeum with the Opera of Marseille with Peer Gynt. It's Robert Powell, known from Zefirelli's film Jesus Christ.

We also have many concerts at the Radio Hall, with big names, as they were also highlighted by Jurowski in yesterday's speech at the press conference. They are important composers who come, there are soloists and conductors who come and, last but not least, they are the orchestras of the country that participate in this series of concerts.

We have left at the end the works that will be presented because already our festival is recognized for these new, contemporary works of the 20th century, which present themselves. And there will be here Die tote Stadt by Korngold, which will be presented by the National Radio Orchestra itself. It is also Lady Macbeth of Shostakovich, whom Mariinski will present. Last but not least, the two works presented by the Marseille Opera - Lulu and Strigoii by George Enescu.

So the program is rich as I designed it. Now we need to do it in such a way as to ensure the health security of all participants.We have already talked with them to make sure they are healthy, to come with the vaccines made. We are thinking of variants that we do not want, reducing the number of orchestra members or canceling some works from the programs because, for example, Mahler or the symphonies of Shostakovich are for a large number of instrumentalists. Although, everyone is vacinated, because that is what we ask of Romanian bands, I am sure that things will change by August and the world will be more relaxed.

So, vaccination is also a condition?

It's a condition for not having problems. We don't know what it will be, but we want to make sure by what we are organising, through participants that will then be in August-September, that all things are quiet and there will be no difficult situations, dramatic situations related to this covid. The world gets vaccinated, the world stays away. It's going to be a bit of a tough time right now, just in the idea that we hope that in summer and autumn it will get better and we can come to the festival concerts. And not only of our festival, that we are not only the beneficiaries of this, but also other festivals. I spoke to Mr. Chiriac in Sibiu, who would also like to do the festival... it's about pop, rock, disco and so on. We want to open up the world, however, because the world without culture and the world without music does not have a bright future.

As the situation now shows, from a health point of view, how will the concerts be conducted with the public? We're talking about how much of the capacity of the hall...

We have several options in mind. We have the 30% variant, which is the primary version, which we want and we are sure that we will exceed it by August-September. It's a 50% version of the public. We are not thinking about the 100% option because I do not think we will be able to reach that figure and I regret to say this for those who want to be in the room. We're going to start selling the lottery subscriptions, starting June 15th, probably when some things clear up. And to those who, unfortunately, will not be able to see these concerts in the hall, we offer tickets via pay-per-view, on the internet; the quality of the broadcast will be very good because we have already talked to Mezzo and a new television station, Quincy Jones's Qwest, who want to record and broadcast some concerts from the festival. We increase that viewing margin so that concerts can also be watched by foreigners within 12 hours so that you can see the concerts in America, and in Asia, and in Europe.

From all over the world.

From all over the world, because I have learned, from the discussions I have had with several artists and more ensembles, that we are somehow pioneers in opening the doors of festivals. There will be other festivals in Germany, France-Aix en Provence, England opens. But there will not be so many festivals, so the public in Romania and abroad will be very interested to participate in these concerts, to see again the big names on the stage of some festivals.

Of course, Radio Romania remains one of the co-producers of the festival and we will also broadcast the concerts of the series. We'll communicate all the data in advance.

And don't participate only with recordings, participate with the Orchestra, and with the Choir. The choir has even more appearances in the festival. You've also helped us a lot with the rehearsal rooms, with all the atmosphere you create. It's a collaboration of over 60 years that the festival has with Radio and we are very happy about that.

Two short questions: Was it the hardest organization in 30 years?

Wait a minute, we've got six more months. Ask me if it was like that at the end of September. Then I'll be able to tell you. In any case, the hardest is looming because it's clear that we have to adapt. It's very hard, but as we did with the competition - we had the first two stages last year and now, in May, we're going to have the semi-finals and the finals, and we've found this solution that we're going to keep for future editions - you know what it's like, we're learning on the go. No one is a doctor in his profession and sometimes we also have to learn at older ages, and the public must understand us at certain times, when it is harder for us and when we are walking in some totally unknown territory.

You anticipated the last question. At this point, what does things look like for the last part of the "George Enescu" International Competition?Because from May you resume the competition.

Things look good. I have spoken to the members of the juries who, being elderly, are already vaccinated. For young people, we want them to fall into that category that already exists in this law of quarantine and emergency situations, so that they are also considered athletes. They come here, stay no more than 3-4 days, they will come with the vaccine made and they will participate in the semifinals and finals. It's a decision we had to make. Maybe a lot of people are thinking about why we didn't make the semi-final and the final online. We can't do it because the semi-final has a part that means the works of George Enescu, which also involve specialist choreographers, because for Enescu foreign comeperitors are not really found at the moment, and the finals are with orchestra and it would have been a shame to compress them into one. But I learned a lot from the whole contest, a lot of things that those who will come hope to keep for the contest.

I am sure that we will resume this discussion in two months. In the second decade of May, if I'm not mistaken, it will resume...

Exactly. So we'll resume this dialogue then. Mr. Mihai Constantinescu, thank you for your presence in Perpetuum mobile.