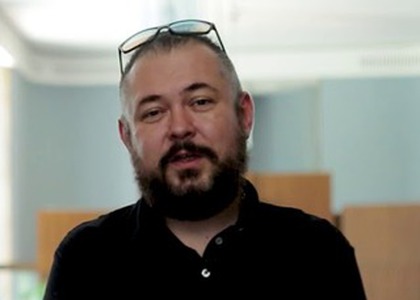 The Jazz Evenings series continues with a concert entitled Love Around the World. How did you choose the theme of this evening's event?

We're on the 8th edition of these recitals in a smaller formula of the Radio Big Band members. The entire situation was obviously imposed by the pandemic and the restrictions and the fact that we wanted to sing and be with the public and, of course, we adapted. We've been playing online, only in FM, without a public in a concert hall and in a restrained formula and we are at our eighth concert which, being held in March, we wanted to make a present to the ladies, given the fact the we've just celebrated the month of love and the spring and, of course, our hope, all of ours, that we'll come back to a sort of normality.

The program combines music from diverse geographical regions. How was it shaped and what's the element that unites them?

All these songs have two elements in common, the initial message, that of the love song and our musical approach, this time in quintet. Everything is set up in a jazzlike manner, even if these are pop songs at their origin, or with traditional influences, like in the case of the song from Cuba that we're playing or songs that were written initially to be film music. The common element is the interpretive manner and the message that we'll try to convey as much as possible because, of course, a love song has the advantage of the lyrics that get right to people, but I think the message will be obvious even if it's an instrumental approach.

Tell us about the artists you'll share the stage with. How is the collaboration going?

The collaboration goes years back with each of them. This time we'll be in a quintet formula. I will play exclusively the flugelhorn. Together with me on the stage will be George Natsis at piano, Adrian Flautistu at contrabass, LaurențiuZmău at drums and Adrian Cojocaruat percussion as well as the prime trombonist from the Radio Big Band. For that matter, all the musicians are members of the Radio Big Band, but there are other formulas for projects that we put together so far. We had octet and sextet too. Every time they were all members of the Radio Big Band.

Given the fact that we are in the middle of the vaccination campaign I would like to ask if you personally consider that this represents a possible solution for us to get back in the concert halls.

The only thing I can do is give my opinion. I'm not qualified in the domain to state if it's a solution or not. From the way it's been presented to me I can say I consider firmly that it's a solution. For that matter, I got my first vaccine taken. I will get the second dose at the imposed interval. I think, but again, without being able to give medical information, that it's a solution and that in general there are professionals in each domain and as long as the doctors came up with this solution, I think it should be treated accordingly.