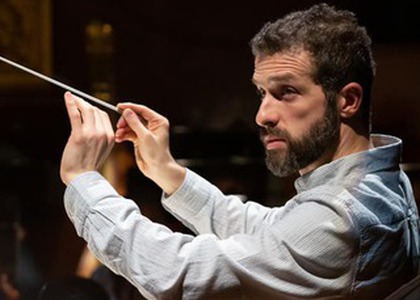 Israeli conductor Omer Meir Wellber, 40, a star of the international classical scene appreciated for both his symphonic and operatic repertoire, is the special guest of the latest issue of the sharp classical music online magazine, which you can access for free at www.sharpmag.net . Starting from the published interview with former assistant to Daniel Barenboim, principal conductor of the BBC Philharmonic Orchestra, musical director of the Massimo Theater in Palermo, principal guest conductor at Semperoper, Dresden and musical director at Volksoper, Vienna, our colleague Ștefan Costache talked the other day with Omer Meir Wellber.

I was happy to read the interview you gave for sharp magazines, a new online publication dedicated to classical music, the current issue being your guest artist. How do you find this new initiative? And I will remind you that its founder and soul is the Romanian pianist Daniel Ciobanu, the editor being Mihai Cojocaru, musicologist.

I think that each of us, in this period of crisis imposed by the Covid 19 virus, must find his personal ways to manifest his creativity, his own ideas - since on the stage it is now, of course, much more difficult. And Daniel is an extraordinary artist, an amazing pianist who also paints - he has many artistic interests, so I would say this: I am not very surprised that he managed to create something so beautiful. And this seems to me to be one of the positive aspects generated by the pandemic, because if you had to support all the concerts on your agenda, you would never have time to think about something like that.

I agree with you! And, speaking of Daniel Ciobanu, what has the collaboration with him looked like so far? Because I guess it connects you to a very, very good and close musical communication, doesn't it? What impresses you and comes to mind the fastest when we talk about the performer Daniel Ciobanu?

We first met in 2017, when we conducted the final of the "Arthur Rubinstein" Contest in Tel Aviv. We then sat together for just a few minutes to talk a little about what he was going to do, and then we went straight into rehearsal. It's nice that when he appeared on stage and started singing, the same concert that others approached in the final stage, everyone, including those in the orchestra, had the feeling that, yes, only now the competition begins! It's a feeling you can't explain, you can't objectify. The orchestra feels that, we feel it without being able to talk about it. But then I learned to know him better and I really sang a lot together so far, he made his debut with me in Palermo, on the stage of the Teatro Massimo whose musical director I am. It was supposed to debut in Dresden but, unfortunately, the event was canceled due to the pandemic; the same - at the Elbphilharmonie in Hamburg. As for me, what I find absolutely fascinating, when it comes to his style, is the fact that he does not invent things that are not noted in the score; but, on the other hand, he does not even sing what is written in the score! And this is exactly how everything should happen - to sing what is written and at the same time do what you want with your music.

This is, in fact, the ultimate freedom of interpretation!

Unfortunately, in classical music there is, at the moment, this practice or fashion: to invent, in essence, a lot: where the piano is written, you play forte and where the forte is past - you will play the piano!Sometimes this is interesting because it allows you to explore new dimensions of a work; but to find someone who really respects the score and yes, the result sounds completely new - here's something you don't meet so often!

Omer Meir Wellber, an interlocutor who expresses his beliefs about music sharp and, at the same time, refined. Interview in full - soon, in the series "Success stories of music", on Radio România Muzical.