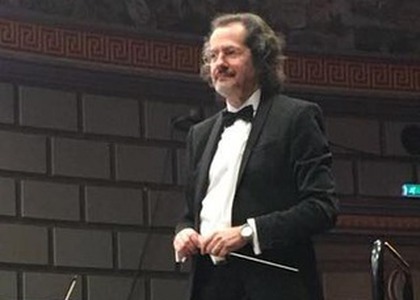 On Thursday, April 8th, from 7pm, a new concert from the Jazz Evenings at Radio Hall series will take place. Titled Funky Bird, the concert will feature pieces composed by Charlie Parker, arranged by George Natsis in a funk style. Performs members of the Big Band Radio. Held without an audience in the Radio Hall, it will be broadcast live by our radio station. Presenter, Sebastian Burneci.

Here we are on the eve of a new concert from the Jazz Evenings at Radio Hall series. How did you choose its theme?

When an idea comes to you ... you don't know where it comes from! This idea simply came to me and, of course, I wanted it to be something new, a new topic for us. I can say that it is a project in the first audition because all the arrangements are new. I thought - what if I brought Charlie Parker from the '40s to the' 80s? To move him about 40 years later. Of course, in the 80's, funk music was very present in its various forms. And then, that's how the idea of ​​having a project of a great bebop musician was born in my mind, I could even say the father of the bebop style, this time on a funk formula and in a funk way. It is true that this idea came to me at a time when I was quite free and spent a lot of time at home, so I had enough time to develop, develop the idea and carry it out. It's not easy to touch Charlie Parker's music.

What did it mean to turn them into funk?

First of all, it meant a rethinking of the songs, of the themes I chose. Charlie Parker's homework, as a good colleague of mine used to say, is already improvisations. They all have an extraordinary improvisational character and it is very difficult to change anything there. However, to go in the manner of funk music, the themes had to be slightly changed, stylized a bit. On some themes I interrupted that continuity present in his music, in favor of syncopes specific to funk music; as we call them, brakes.

The Funky Bird concert brings on stage a band of 9 instrumentalists, bigger than at the previous concerts in this series. How did you think of its structure?

The structure was designed for 4 wind instruments - trumpet, alto saxophone, tenor saxophone, trombone - given that they are the main protagonists of this project. Charlie Parker's music is very thoughtful for the wind, even if it is more for a solo instrument, a alto saxophone. Here, I wrote the themes for 4 wind instruments; either I used unison, I used dialogues, I used voicing. Unfortunately, the formula will not be complete because one of the saxophonists, meanwhile, has some health problems, and then we are forced to play with only 3 wind instruments - trumpet, alto saxophone and trombone. Otherwise, the formula is the known rhythm section. Apart from the trio that I used in almost every project, I have percussion and I also have a guitar. Why? Because funk music requires an electric guitar.