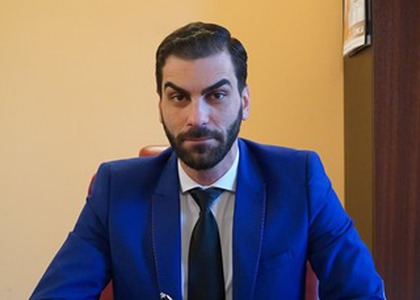 Interview with Gabriel Zamfir - Manager of the “Oltenia” Philharmonic from Craiova

More than a year has passed since the outbreak of the pandemic, and cultural institutions still have to adapt to the restrictions imposed. About how the activity of the Oltenia Philharmonic from Craiova was affected and what are the perspectives for the next period we find out from Gabriel Zamfir, the manager of the institution, in an interview conducted by Florica Jalbă:

Immediately after the end of the state of emergency, in June 2020, you resumed the concerts of the season, and some of them took place outdoors throughout the summer. From last autumn until now, you have organized concerts at the Philharmonic's headquarters, either with or without an audience in the hall, but broadcast online. What is the current situation of the Oltenia Philharmonic?

That's right, in the summer of 2020 we managed to continue the 2019-2020 season that we had interrupted in March, with the establishment of the state of emergency. Starting with October, on the first Friday of the month, we managed to open the new season, 2020-2021, with an anniversary concert - the Union of Composers and Musicologists of Romania turned 100 years old. Throughout the season, we managed to hold concerts both online and with the public. The last concert was on Friday, April 2nd, another anniversary concert, where we managed to celebrate the master Dan Dediu - composer and musicologist, member of the Union of Composers and Musicologists of Romania.

Currently, the activity of our institution is interrupted because the Dolj Emergency Situations Committee sent us a communiqué forbidding us to carry out any kind of activity. I hope that, immediately after the incidence rate falls below 3 per thousand, we will resume our activity as soon as possible.

What have you planned for the next period and until the current season opens?

Unfortunately, the times we live in today ... these troubled times have not allowed us to make plans for a longer period. We managed to schedule concerts for a maximum of two to three weeks in advance, even if in the normal period we scheduled an entire season since September; today, times do not allow us to do so. I hope that as soon as we return to work we will be able to resume the concerts we cancelled in April.

I noticed a predilection for the presentation of some works in the first audition, some being composed especially for the concerts of this season in Craiova. Will you somehow follow this line?

Yes, it was a policy that this season - atypical, I might say - I approached, because I could not turn to international musicians. In each concert we had conductors and soloists from Romania because we could not risk resorting to the services of conductors or soloists from Europe. In Craiova we opened the season on the 2nd of October with the Concerto for clarinet, string orchestra, piano and percussion in the first audition of maestro Iorgulescu, president of UCMR. We were glad that on the 2nd of April, when we celebrated the maestro Dan Dediu, we listened in the first absolute audition to a work composed for the Oltenia Philharmonic, "Fandacsia" - a rhapsody on themes from the opera "A lost letter". Of course, as far as the times allow, we hope to resume our activity with international composers and musicians, as music lovers in Craiova have been accustomed to.