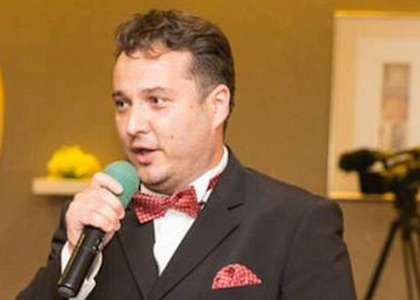 Due to the current pandemic circumstances, the latest premiere of the Brasov Opera was presented online, for the first time in the history of the institution. We learn from the tenor Mihai Irimia - Artistic Director of the Opera from Brașov - about the performances of the Opera and about the future projects, in an interview conducted by Florica Jalbă:

Brașov Operacontinues to have a fruitful activity, even in the pandemic - starting from the artistic moments filmed at home and broadcast online during the state of emergency, continuing with the performances adapted and presented during the summer in the Opera yard and until the performances which took place on the stage of the institution, being broadcast online. Recently, a historic moment happened for the Opera, the new production of the operetta Viennese Blood by Johann Strauss-son being presented live online. How do you view this period, both from the point of view of the soloist and the artistic director?

It is a delicate situation for everyone, but we have managed to adapt. It's not the only show we've been able toput up in this period. I assume, and I realized this, following the other institutionsalike, that we have managed to be the most prolific (at least in terms of numbers) cultural institution. We had shows starting in May 2020 and we had small break periods ot time, namelybreaks of two weeks. Going back to the premiere of Viennese Blood - it's an attempt of a performance we made in the summer in our yard, because that's how we managed to adapt to the global situation; we built a stage in the courtyard of the Opera where we had performances.However, taking into consideration the duration of the performances (one hour and twenty minutes), we had to cut them into parts. Later on, once we were allowed to perfom in the Opera hall, we managed to stage a slightly shorter version for the first time (due to restrictions, obviously). Finally, on Saturday, March 27th, we managed to get to the final version of the premiere. It's a very, very delicate job, the orchestra is made up of half of the members it should have, the choir always enters the stage with a mask on... and all the other measures we try to take care of.

What are your plans for the future performancesand until when the current stage is available for the public?

Speaking of the future projects, I want to tell you that the Viennese Blood operetta is not the only premiere we have prepared. We have the pleasureto organize a neoclassical ballet this week. It is called The Seasons - to the music of Vivaldi and Piazzolla, an extraordinary ballet show, where we will also have guests. Because this month we have the International Dance Day, we want to celebrate itthis Saturday with the premiere of this show. It is a show that combines classical and neoclassical ballet, and even with some Argentine tangoinfluence. The two guests we have are a famous dance couple of Argentine international tango, Csongor Kicsi and his partner, Raluca Aldea. The choreography and direction of this show belong to the master Alex Fotescu, and the scenography to Rodica Garştea. We will then have a month full of operetta. We will start with a concert, L'amore all'opera, where we will present famous areas, and after this we will start with operettas with the Land of Smiles, with The Merry Widow and with an operetta concert, called Operetta sings and dances. All of these will take place in May. Later on, we will have the summer season, where, together with the City Hall of Brasov, we will build a stage in the city center.All cultural institutions from Brasov will take part of this show.No doubt that we will also be a part of this project, wanting to help the public, the one who suffered the most during this period. I am happy to say that the Brașov Opera has become a partner of the Ionel Perlea International Festival (in the new format) which will take place between May 27th- 29th. It will aslo offer an award to a young performer. This award will be given at the Festival Gala, consisting of a show on the stage of our Opera. We will have another project in the summertime. It is called Opera Castle and all the towns around Brașov take part in it. We will have performances in collaboration with the town halls of the respective localities.