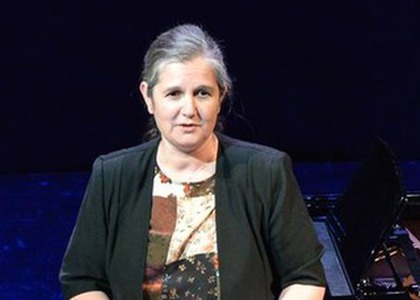 Between April 19th-23rd, 2021 takes place the 12th edition of the CHEI Festival organized by the National University of Music Bucharest. The series comes back online after a one-year break imposed by the COVID-19 pandemic, and includes a musicology symposium and classical music concerts, jazz, electronic music and film music. Pianist Verona Maier, vice-rector of UNMB, spoke about the festival within the edition of Perpetuum mobile on the 21st of April.

The following topic in Perpetuum mobile is the CHEI Festival and I welcome pianist Verona Maier!

Hello! Thank you very much for the invitation.

I'm glad to hear you this afternoon. You are vice-rector at the National University of Music in Bucharest, the institution that organizes the CHEI Festival. The series reached the 12th edition after a break imposed by the COVID-19 pandemic, and all of the festival events take place online this year. First of all, how was this transition for the festival you are in charge of?

Thank you for the opportunity to tell it was complicated, because, as you very well know, for the musicians of any kind, direct contact with the audience is not only essential, but I would say it is ontological, it is a part of his definition as a role and as a being. Therefore, I would say it was a very difficult step to take. I won't deny, I am convinced that this edition will remain a unique one. I truly hope we will never need this variant, this alternative. Obviously, we have learnt a lot from it, and we will use it from now on to improve other things, but I hope with all my heart that next year's edition - we have to think whether we will call it the 13th or the 14th, given that we skipped a difficult year - will find us in the Radio Hall again, because radio broadcasting was always our reliable partner, in the hall of the Philharmonic of the Romanian Athenaeum, in our own halls, of the National University of Music, halls that are more and more present in the consciousness of the Bucharestian public and not only.

All the events are available on YouTube, on the UNMB Studio spectacole account. What have you proposed for the first two days of the CHEI Festival, in other words, for those who haven't watched the materials yet, what can they find on the platform at this moment?

At this moment, we have the opening night of the festival, in which, apart from the opening made by Rector and Professor Diana Moș, we have an evolution of a series of students, who, despite a very complicated year, have made a lot of things; which is why, owing to the initiative of the same rector, these exceptional students received excellence scholarships from which they can understand that the university highly appreciates what they do. After the night of the excellence scholarships, yesterday was the night in which we showed the alternatives through which we try to evolve institutionally. It was about four projects won by the National University of Music last year, four projects funded by the Institutional Development Fund of the Ministry of Education. Last night was entirely dedicated to them. The coordinators presented these projects and their beneficiaries, our students. This has been until today.

Tonight we will have some of our most creative students from the Classical Composition Specializations, with an evening of electronic music, and from the Jazz Music Specialization, with an evening coordinated by Professor Mircea Tiberian, who has been coordinating this series for years, together with his young collaborators, Vlad Popescu and Maria Trohin.

After that comes a night that I have no doubt people will appreciate. It is a night entirely dedicated to the creation of light and pop music. We have a specialization that has fallen into very good hands. I am talking about Andrei Tudor, a name that doesn't need academic titles for telling something to the Romanian music world. He also coordinates the Film Music Composition Specialization. So this evening we have film, pop music, jazz and electronic music.

So tomorrow is a day of concerts.

Yes. Tomorrow is a very powerful day, that's how I would call it, because the events start at 11AM with a round table presided by Tiberiu Soare. In this round table will participate - again, they don't need any kind of introduction - Horia Andreescu, Cristian Mandeal, Marin Cazacu, Mihai Constantinescu and of course, one of the pillars of the National University of Music Bucharest, namely composer Dan Dediu. This will have happened in the morning - this time is not used in vain - and after that we will have a recital performed by the classes of classical composition, a night coordinated by Diana Rotaru. And then, another project that meant a lot to the university last year, "I am Fidelio!". It is a project in collaboration with the Goethe Institute in which creations inspired by Beethovenian motifs have been judged, valued and then rewarded by a jury in the fall of 2020.

And the last day of the festival…

We'll leave the last day to the students who have made remarkable things and who found an alternative during this period, namely the students who participated in the composition contests "Ștefan Niculescu", the theory and musicology contests "Alexandru Pașcanu", but also in a new - it is the first edition - Byzantine music performance contest.

Mrs. Verona Maier, thank you for your presence in Perpetuum mobile. Good luck in this 12th edition of the CHEI Festival and I hope that next year we will talk about an edition in which the audience is in the hall with the musicians.