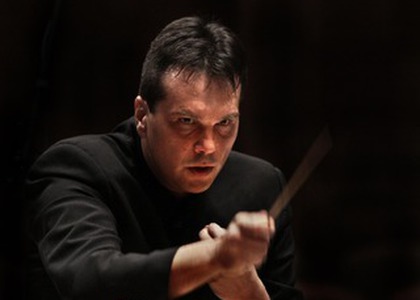 The concert of the Radio Chamber Orchestra tonight will take place under the baton of the conductor Radu Popa. The program includes Tchaikovsky's Variations on a Theme, op. 35a by Anton Arensky, Variations op. 33 by PiotrIlyich Tchaikovsky on a Rococo theme for cello and orchestra and Symphony III in D major by Franz Schubert. The soloist of the evening will be the cellist Răzvan Suma. At Radio Romania Muzical you will be able to listen to the concert, live from the Radio Hall, starting with 19.00.

Details about the concert can be found from conductor Radu Popa, in an interview done by Florica Jalbă:

You return to the Radio stage for a concert with a romantic theme, the first one you will perform on this stage without an audience in the hall. How do you perceive the experience of such concerts that reach the listeners only through technology?

For me, what Sergiu Celibidache said remains valid - live music remains the only option. After all, even for artists - I'm talking, of course, from my point of view - it's a little more complicated, weirder to play music through the public. Always, a concert with the vibration of the audience in the hall is what we want and what we need to be able to create on stage the moments that the audience can taste.

Please tell us what is the argument for choosing the first two titles in the program - the Arensky and Tchaikovsky Variations?

Tchaikovsky's rococo variations were the choice of our soloist, Răzvan Suma. But, I thought that in order to complete this variational picture of our concert, we could do a unique work and I chose together with those from the musical secretariat of the Radio Chamber Orchestra this title of Arensky. It is a work that the orchestra sings for the first time. It is a very interesting work, very beautiful and I hope the listening audience likes it.

The concert will end with Schubert's Third Symphony. What is its role in the design of the program?

From the very beginning, Schubert was the first piece of resistance in the program. The others joined. I thought it was a more youthful work of Schubert, in the context of spring, in the context of the resumption of concerts ... I thought it was a music as bright as possible, youthful, for everyone and of course it was received as such. The musicians in the orchestra approached her with aplomb and joy. These were the arguments for choosing the program.

What projects do you have for the next period?

For the next period I do not know if we can talk about projects, as it goes from close to close. It is unknown at this time what he will do after leaving the post. And, in general, the philharmonic or performance institutions organize the performances for the next month. So, for the month of June, at the moment I have the closing of the season at the Timisoara Philharmonic and for the time being that is it. We'll see what happens next.