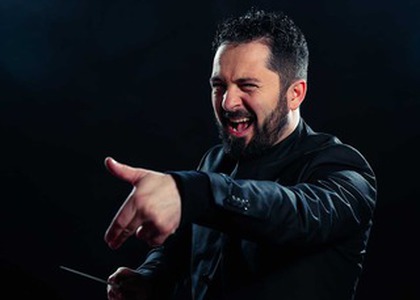 Conductor Daniel Jinga - Guest of the week at Perpetuum mobile

At the initiative of the Ministry of Culture, the Bucharest National Opera presents on Saturday, May 22nd, starting with 19:00, the Extraordinary Gala "LiberaMusica", a cultural event that is part of a pilot program to resume performances in the most relaxed conditions, addressed only to individuals vaccinated with both doses against COVID-19. At the rostrum will be the maestro Tiberiu Soare, and the host of the event will be the actor Mircea Rusu, Artistic Director of the National Theater "I.L. Caragiale" from Bucharest. It is one of the events that the conductor Daniel Jinga - the interim manager of the Bucharest National Opera and the Guest of the Week at Perpetuum mobile - discussed in the edition of Wednesday, May 19th, 2021, with Lucian Haralambie:

Welcome to the conductor Daniel Jinga, the interim manager of the Bucharest National Opera!

Good afternoon, thank you for the invitation!

The calendar of the institution you manage includes more and more events in the next period - there are 5 in the next 4 days. For start, please tell us about the shows of tomorrow and Friday, May 21st, Cavalleriarusticana and Paiațe, both directed by Ion Caramitru. How will these unfold?

As you know, there is a custom in the world of opera. These two shows, in general, take place in the same evening - first Cavalleria and then Paiațe - because they are relatively short works. Instead, due to the restrictions still imposed by the pandemic, we will schedule Cavalleriarusticana on Thursday night and Paiațe on Friday night. In this way we can make a short show, without a break, to comply with the sanitary norms, but, at the same time, not to cut a work, which is, in fact, a masterpiece.This is a discussion that I would like to have, at some point, with those who establish these measures and maybe together we can reach some solutions that do not destroy the form of a work. Because as I have said before, from a musical point of view, these masterpieces are primarily masterpieces of form, even if the background is very important and we all know that the background is important and not the form, in the case of a work of art, form is what makes the masterpiece. And that's what I studied at the Conservatory when I made musical forms. This is, in fact, the genius of a composer, of a masterpiece maker.

Specifically, we are talking about a 50% occupancy of the room, if I understood correctly. All measures are well established. The audience will participate in a mask in these two shows.

Yes. I'm glad you said that. We are involved in the two pilot projects together with the Ministry of Culture, pilot projects for people who have been vaccinated or who have gone through the disease, people who can come to work on the basis of a vaccination certificate - they will be checked with the help of the bulletin. And we, while communicating these conditions for these two pilot shows that we organized, we had a problem in communicating to the other categories of public that in parallel, apart from these two pilot shows, the National Opera performed the artistic activity and organized its performances and the public access as it happened before; that is, on the basis of mask, spacing, capacity 50% now, because it allows us the incidence rate, and, of course, without any other type of screening, vaccination restriction, antibody proof and so on. I say this because we expect all categories of audiences at the Opera and we do not discriminate in any way against our audience.

On Saturday, May 22nd, the extraordinary Gala "LiberaMusica" will be resumed, an event within the pilot program initiated by the Ministry of Culture. How did the first gala, on May 14, take place, and what will the audience watch on Saturday?

Saturday will be the same gala, the same repertoire, the same soloists. Basically, there will be no change from a musical point of view. Those who saw the gala on Saturday have no other reason to come unless they want to hear the same things again. We decided to resume that gala because we want to address it to other categories of public, who will come outdoors. In other words, on Saturday, in addition to the vaccinated people, people who take a PCR test no later than 72 hours in advance, an antigen test no later than two days before the show or prove their passage through the gala can also attend.In other words, we will reach a larger audience range, on which we will then do all this post-event monitoring process. Following this experiment, corroded by the results that we will analyze from the first pilot episode, we will be able to present to the health authorities the evidence that, we hope, the work is not a factor of transmission of this stressful and dangerous virus and ourartistic lives, in the institutions of performances can move forward in conditions as close to normal as possible.

So be it! The 1st of April marked the opening of the Centenary Year of the Bucharest Opera. What does the program for this summer look like and what are you preparing for the public by the end of 2021?

We want to prepare ... and I will start with the end, because it is the biggest wish, we want to present to the public on December 8, 2021 a new premiere of Lohengrin, because on December 8, 1921, under the baton of composer, conductor, musician George Enescu , the first premiere of the new institutionalized Romanian Opera took place and this premiere was the premiere of Lohengrin. So we want to create a bow over time. We would like it to be a production that also has a museum character, we would like it to be as close as possible to what happened then, from the atmosphere, the scenery ... maybe we will think of a dress code. But, all these things are related first of all to a budgetary rectification that we are waiting for and, why not?, to a favorable evolution of the pandemic and of the sanitary situation in Romania and in the world. Apart from that, of course we want to have other shows and related events dedicated to this year's celebration, and if things will not be possible for the reasons highlighted above, then we at least try to remain permanently in the public consciousness, informing them about the history of the National Opera. I also said at one point that if we cannot write history, for various reasons, we must at least understand, know and honor history.

Thank you for being present in today's edition and good luck!