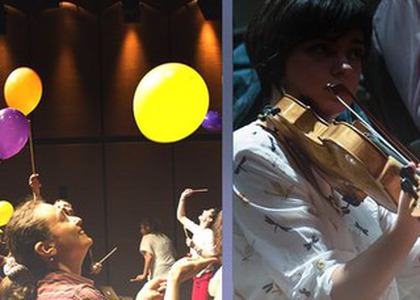 Interview with Oana Cosmovici, president of the "Culture through Music" Association

The "Culture through Music" Association in collaboration with the Jaques Dalcroze Institute in Geneva will carry out in Bucharest, starting with July 10, the international continuing education program - the Dalcroze Certificate in Romania. The course, which can be attended by a maximum of 25 participants, is addressed to professionals in the field of music, dance, acting, educational sciences or social work. At the end, they will receive a diploma recognized by the Jacques Dalcroze Institute in Geneva. For more details, you can access the dalcroze.ro website

Information about the program can be found from Oana Cosmovici, president of the "Culture through Music" Association:

Please tell us, what does the Dalcroze certificate offer and what is the novelty of the course you are organizing this year?

The Dalcroze Certificate in Romania is a continuous training program, which is addressed to professionals from Romania, but also from neighbouring Romania, professionals who come from several artistic fields, such as music, dance, acting and non-artistic - education, psycho-pedagogy, social work, therapy. Finally, professionals who generally work with people. This social part of Dalcroze music pedagogy is very well developed and very versatile. It can be used successfully in many professional fields. So, it is a training program, which ends with a diploma recognized by the Jaques Dalcroze Institute in Geneva, so by an educational institution in Switzerland; the teachers are established and approved by the Jacques Dalcroze Institute in Geneva. As benefits, they are multiple, but first of all, I would say that it brings a new professional perspective to those who enrol in this program, new means of action in their professional field and can even increase their range of action in their profession. In the current edition, 2021-2022, which starts on July 10, there are many new things. First of all, I would say that it is a program that proposes an active music pedagogy, the Dalcroze pedagogy of several professional categories. So, it is, I think, the first program of this type in Romania that proposes music as a way of intervention in several professions which would be a kind of laboratory of experimentation and collaboration mediated by music between several professions with social, cultural and artistic impact. The second would be that it is a collaboration and I think that there are not many of this public-private type, in a Swiss educational institution and an NGO from Romania. The third novelty would be the very active musical pedagogy of Dalcroze, which, in Romania, is known mostly theoretically, because it is not practiced, and it can be understood only through practice. This is exactly what Emile Jaques Dalcroze, its founder, said at the end of the 19th century and throughout his career - that we look at and admire the effects of this pedagogy and this method of music, but we will only understand it by practicing it. This method, by the fact that it also involves body movement and musical emotion and, of course, cognitive analysis, involves the whole human being and therefore, its practice brings both physical and mental well-being. It is also interesting how this program is organized, respectively, it has a total of 215 hours, which are spread over several stages. It is an intensive Dalcroze week, there are nine weekends of 12 and a half hours of classes, then there is the Dalcroze Summer School, in July 2022, and in the meantime, there is a 25-hour observation stage, in which participants can see how this method is applied in different contexts. Interestingly enough, its duration is at least one year, it allows participants to engage in the course and then return to their professional environment, apply what they have learned at the courses and then return to the course with feedback on how things happened. And this also allows a monitoring of how they can use this method in their professional practice by the team of teachers. This monitoring also allows an adaptation, a personalization of the course to the needs of each individual.