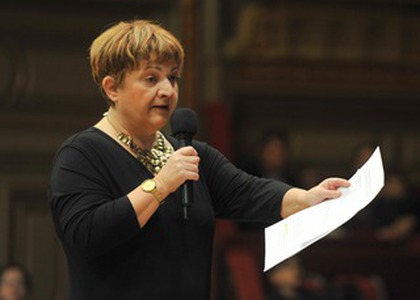 Interview with musicologist Cristina Sârbu, coordinator of the project "Classic is fantastic"

The 2020-2021 Season: "Classical is fantastic. How do we understand music?" ends on Saturday, June 5th, 2021, with the concert-show "Rossini and the story of Wilhelm Tell". It will take place on the stage of the Romanian Athenaeum, from 11.00. Public access is allowed in proportion of 50% of the capacity of the Great Hall.

We will find out more about the show from the musicologist Cristina Sârbu, the project coordinator:

Please tell us about the concept of the concert-show that will close the current season of the project. How did you imagine it and who are the protagonists?

The concept is, as the saying goes, old. I mean, ten years old. "Classic is fantastic", our education project through and for music, turned 10, actually 11 if I think about it, because the season that we are finishing now is the 11th. Particularly to this concert, we bring from the stage of the Odeon Theater, where the performances "Childhood of great musicians" take place in the current season of the theater - and there are 12 such performances, from Bach and Vivaldi, to Enescu and Gershwin - on the stage of the Romanian Athenaeum , in the Children's Month. What addition does the version from the Great Hall of the Romanian Athenaeum bring? It brings live music. In a theater, at a theater show, we must use recorded music. Here, on the stage of the Athenaeum, we invite musicians to illustrate live, on the spot, the musical moments we need. This "Rossini and the story of Wilhelm Tell" has a somewhat special status, because we also have guests - a bass in tomorrow morning's concert, Stefan Lamatic - but I must say that the compact band "Classic is fantastic" consists not only of actors, but also of singing actors. So tomorrow you will see the actors Filip Ristovski, Selina Colceru, Monica Ciută, Irina Sârbu, Alexandra Laura Badea, Alexandru Unguru and the pianist Raluca Ouatu playing. You will hear the actors not only talking, but also singing. For example, Filip Ristovski will perform in a very special, funny and conquering way the famous aria of Figaro, and Monica Ciută, who is an actress and director, has been flirting with music for a long time and will give you a demonstration of virtuosity in Rosina's area.

And will this event be interactive, as usual? How will the young spectators be involved?

Yes, it will be interactive as usual. We learn different things, we ask different questions and we are always surprised at how many things they know. Of course, the interactivity in the Great Hall of the Romanian Athenaeum is a little more difficult to do, although it is possible, but at the Odeon Theater shows - I'm glad to tell you that I had 4, with the halls full in the last days - the children's voices almost cover the voices of the actors, they are so interested in answering and asking questions.

Looking back on this season, how do you feel about it?

These last seasons have been truncated. We did what we could. We had a "Let's sing to Santa Claus in jazz rhythm" in December, so we didn't stop at "Classic is fantastic" at all. Since March, we have entered our normal rhythm, with one concert per month and we hope that from October we will return to the rhythm of one concert per month at the Romanian Athenaeum.

Do you already have a date and a title for the opening of the next season?

Titles I can give you, dates - not yet. In October, as usual, we want, as tradition demands, to start with the Engineers' Orchestra, with the hits of classical music, symphonic music and we have invited children in plays of great virtuosity. In November we planned "How do we understand music? Carmen's Fantasy", when we will start from Bizet's music, and the singers will perform the main areas, then we will move on to variations on Carmen's theme for violin, for flute, for piano; we will even have the Bizet-Scedrin ballet stage and even a jazz variation. In December, we have a symphonic concert - we hope to have a symphonic concert - with the Orchestra of the "Dinu Lipatti" National College of Arts in Bucharest. The theme would be "How to make and break an orchestra?". We'll start with an instrument, two, three, five, seven, nine ... an entire orchestra, and then we'll end, we hope, in a very funny way, with Parting, Haydn's symphony.

Before we end, if you allow me, I would like to draw attention to the collection of books about music called "The childhood of great musicians", which was posted and can be downloaded for free on the website clasicefantastic.ro, in the virtual library section. There we have a wonderful "Rossini and the story of Wilhelm Tell". Those who want to come on Saturday, might want to go through the pages of this book, which is beautifully illustrated.