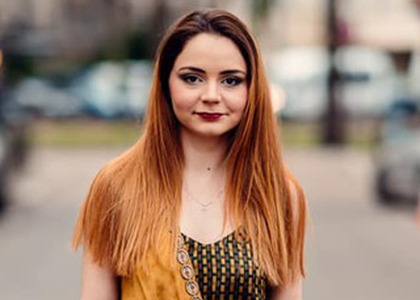 On Sunday, June 13th, everyonewill be able to watch the recital included in the series "Heirs of Musical Romania", which will be offered by cellist Andrei Ioniță and pianist Daria Tudor. The program, with the theme "Freedom", brings together the works Old Song by Paul Constantinescu, Sonata op. 40 by Dmitri Shostakovich, "In memoriam" by Dan Popescu and Sonata no. 3 for piano and cello by Ludwig van Beethoven. The hall will be able to occupy 30% of the total capacity.

Daria Tudor, on June 13th you will return to the stage of the Radio Hall, together with the cellist Andrei Ioniță. With what thoughts do you see the return on stage in front of the Romanian public?

It is perhaps one of the greatest joys, because, in addition to the fact that it is a concert at home with Andrei, it is also the first concert I will give to the public and I am very happy that this will happen at home and honestly, I can't wait.

For this recital you have prepared opposites by Paul Constantinescu, Dmitri Shostakovich and Ludwig van Beethoven, three works representative of the space and time when they were composed. By what criteria did you join them in this program?

There are works that are very dear to us. The Shostakovich Sonata is the first sonata for piano and cello that I have performed. Beethoven's sonata is the sonata I recorded with Andrei, at the beginning of the pandemic, in the first lockdown, from a distance, me at home, he at home. The old song by Paul Constantinescu is one of the works we performed in the Hope at home concert, in February with Andrei, and along with these three works we will have in the program the work In memoriam, by Dan Popescu. All the works that you will hear on June 13th, at the Radio Hall are works that are very dear to us, that may have a history regarding us performing together and that, for each of us, at certain moments of life, they meant a lot. We hope you enjoy these works, at least as much as we do.

You have been collaborating for some time with the cellist Andrei Ioniță and more than that, you two have an old friendship. How would you characterize the experience of singing with Andrei Ioniță, over the years and how did you evolve as a duo?

We met when I was about 11 years old, I think, and I started as a Sternin Trio, with violinist Georgeta Iordache, who is now in Cologne, a member of the WDR orchestra. Since then I have had a lot to learn from Andrei. Andrei also plays the piano extraordinarily well, and my love for chamber music, so to speak, suddenly began with my friendship with Andrei. He moved to Berlin, a few years later I also came to Berlin and this friendship sometimes materializes in our appearances together on stage. Every time I meet him I have a lot to learn from him. It's a great pleasure to be with him and sing with him. He is an extraordinary man, extremely spontaneous, he is an extraordinary musician and I am very happy that we know eachother and that we can perform together.

Finally, what musical plans does your duo have for the near future?

Immediately after the concert at the Radio Hall, on June 17th, we will be in Iași with Ioana Cristina Goicea, where we will perform Beethoven, the triple concert. The calendar is, of course, considering the concerts that werepostponed, canceled, so, while learning from Andrei, I will remain spontaneous. For this summer, June 17th follows in Iași.