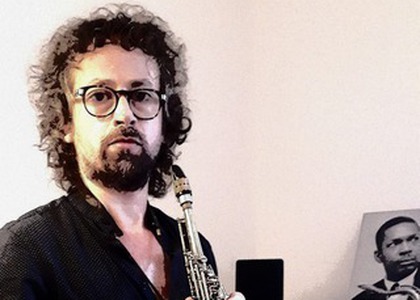 Tomorrow, June 10th, at 7 pm, the last concert of this season of the Jazz evenings at Radio Hall series will take place. Titled "Here's ToLife!", it can be considered a song dedicated to the joy of life and the return of the audience to the hall, after a long series of events broadcast live only on the airwaves and online. Performs members of the Big Band Radio. The project design and musical direction belong to Paolo Profeti. Sebastian Burneci will present.

Here we are on the eve of the last concert of this season of the Jazz Evenings at Radio Hall series - Here's To Life! What is his idea and what will we listen to?

The idea is to sing in front of the audience ... that is, after a year and a half since we no longer sing with the audience in the hall. That's why the title, Here's To Life! The program will be a playful, hard bop repertoire from the '50s, but also more modern, arranged by Mr. Natsis, Mr. Burneci and me.

As you said, after a long series of concerts without audience in the hall due to the pandemic, you will finally meet the spectators again. How do you and your colleagues feel about this moment?

We started this series of concerts a year ago with the Big Band and in the combo, ie the smaller band of the Big Band Radio. We had 12-13 songs without an audience, and I think we are all with great emotion and joy to join again and have the audience in the hall. It is our mission to sing with the public, not just between us and the broadcast. That was, I think, very difficult! Especially in jazz, where the audience, reacting, helps and supports us.

Here's To Life! brings on stage a formation of six instrumentalists; in fact, the nucleus that generated the current Jazz Evenings series at Radio Hall. Will you continue this series next season?

Honestly, I don't know, but I think so. We feel very good in this formula, being also arrangers - me, Sebastian Burneci on trumpet and George Natsis on piano. By the fact that we are even fewer, we have more space to improvise. So, we really like both the role of arranger and the role of improviser. I hope we will continue with this series of concerts.

We are in the middle of a vaccination campaign. What is your opinion on this? Do you think that vaccination will solve the current situation and we will be able to return, relatively soon, completely back to normal?

That's a good question, and I think we should have time to talk. In short, I think so, vaccination could help. I'm vaccinated, but I don't think they should be. I think it could help us to return to normal, in a closed, indoor environment, where if everyone were vaccinated, they should not wear protective masks.