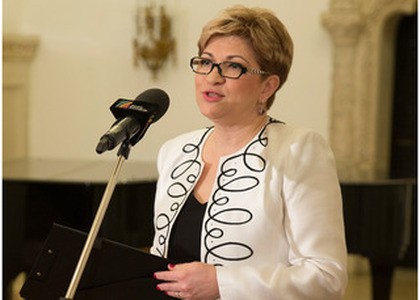 Liliana Staicu, the RRM manager and director of the Radio Romania Orchestras and Choirs

On Friday, October 15th, the National Radio Orchestra will perform the first concert of the 2021-2022 season at the Radio Hall. About the concerts scheduled this year, Liliana Staicu, the manager of Radio România Muzical and the director of the Orchestras and Choirs of Radio Romania, spoke with Lucian Haralambie during the Perpetuum Mobile edition on Wednesday, October 13th.

Liliana Staicu, the manager of Radio România Muzical and director of the Radio Romania Orchestras and Choirs. Glad to see you.

Glad to see you too. Thanks so much for the invitation.

In just two days, the 2021-2022 season will begin at the Radio Hall. What are the plans for this year's concerts?

Indeed, despite everything that's happening around us, we try to situate ourselves in an area of ​​normalcy as much as we can and try to open the new season. Here, as everyone knows, in Bucharest, things are not going well at all, but we've taken all the measures in such a way that everyone in the orchestra is safe, feels safe, respects the measures of distancing, disinfection, absolutely every measure, so that we can offer the public that will come to the Radio Hall on Friday night a concert as they want it to be. Look, more than two weeks have passed since the end of the Enescu Festival. We wanted to have this break until the beginning of the season, so that music lovers can happily return to a concert hall. It's true, we'll be able to welcome them in the Mihail Jora studio, in the Radio Hall, according to the legal regulations, only those who are vaccinated or those who have gone through the disease and meet those conditions that everyone knows and only based on the digital certificate.

50% within the hall. Indeed, we've put tickets on sale with this number of seats. We assure everyone that in the hall, not only on stage, we'll ensure all the conditions for things to take place normally. So, what can I say, we can only go on with confidence and hope that music, among other things, will heal to some extent the period we're going through now and souls as well.

And maybe everything we're going to go through everything that happens much faster. Tickets are available on iabilet.ro…

Exactly. Tickets are available on the website iabilet.ro and also on the day of the concert, so for the opening of the season, Friday, October 15th and at the box office of the Radio Hall, starting with 1 pm.

Therefore, the season will begin in two days at the Radio Hall, with a concert by the National Radio Orchestra, an ensemble that will be conducted in the opening concert by Sascha Goetzel and the soloists will be...

Alexandru Tomescu and Josu de Solaun.A duo that you could also watch during the Stradivarius tournaments, which you know well. So, Alexandru Tomescu, violin, and his close collaborator and his friend from Spain, Josu de Solaun will perform the Concerto for piano, violin and orchestra in D minor by Felix Mendelssohn, and the program, as you said, will be conducted by the renowned Austrian conductor, Sascha Goetzel. It will also include Beethoven's Egmont overture and Richard Strauss's Knight of the Rose suite.

For those who won't get to the Radio Hall, it's important to mention that we'll broadcast it live.

Exactly. They will be able to listen to the concert, as usual, on Radio Romania Musical and Radio Romania Cultural, starting with 7 pm.

Last year I broadcasted the concerts on my Facebook page too. Will this happen again this year?

No. This time no. There will be no video transmission, only audio, on the two stations I mentioned.

And on Wednesday, October 20th, the season opens for the Radio Chamber Orchestra. There we'll have David Grimmal as our guest.

Yes. David Grimmal took part in the Enescu Festival, in the series Great Orchestras, together with the ensemble Les Dissonances. This time he'll be in the position of conductor and soloist of the Radio Chamber Orchestra, in a full Beethoven program. We're talking about the Violin and Orchestra Concerto and the 7th Symphony. I'd like to say that it's a concert that I scheduled for the first time in the year of Beethoven. It was then meant to end the 2019-2020 season of the Radio Chamber Orchestra. I rescheduled it last season. It wasn't meant to take place that time either, so we hope that now, at last, we'll be able to receive David Grimmal properly, together with the Radio Chamber Orchestra. It will be an experience for our ensemble as well, because, as we know, David Grimmal will be a soloist at the Beethoven concert, the violin concerto, and will be on the chair of the master concert, so he'll play in the orchestra at the Beethoven symphony, this means that the ensemble will play practically without a conductor. It's an experience I had once or twice with Liviu Prunaru. It's not easy. I hope things will go well. I'm convinced that it will be a wonderful concert.

We hope for the third time to be a charm.A day later, on October 21st, the season opening for the Radio Big Band.

Exactly. It's a concert that we wanted to schedule earlier as well, but it wasn't possible. It's a concert that will have Luiza Zan as soloist. Last year, the Casa Radio Publishing House released an album from an older Big Band Radio concert with Luiza Zan and now we'll make the official release of the album and, of course, Luiza Zan will also give autographs on this album. Ionel Tudor, the Radio Big Band, Luiza Zan, on Thursday, October 21st, from 7 pm., we're waiting for the jazz lovers under the same conditions that I mentioned at the beginning.

Because we're talking about an entire season after all, 2021-2022, as the situation looks now, hoping it will get much better, what are the directions for this year?

At the moment, everything we have planned for sure is happening in December. Of course, the second part of the season from January to June also has the most important concerts already set up. There are a few things I'd like to mention. As usual, we'll mark the Radio Romania Day with a special concert of the National Radio Orchestra, on October 29th, Cristian Mandeal will be at the desk, and the soloist will be the pianist Constantin Sandu, who will come from Portugal for this concert. We'll also mark the National Day. This time, the concerts were scheduled to take place around December 1, so both the National Orchestra and the Chamber Orchestra will have a concert dedicated to this event. The National Radio Orchestra, with Răzvan Suma soloist and conductor Cristian Oroșanu, and at the Chamber Orchestra we'll have as guests Gabriel Bebeșelea at the desk and Andrei Ioniță on cello. There will also be a few more concerts within the season that can be found in the Euroradio concert season, the season of the European Radio Union, which is broadcast live by a large number of public radio stations in Europe and beyond. These are two concerts, one in December, which will have as soloist the young guitarist, based in the United States, Dragoș Ilie. He's one of those who won awards at the Heirs of Musical Romania scholarship, a contest organized by Radio Romania Musical and the Rotary Pipera club. He will perform the concert of Aranjuez, by Joaquin Rodrigo, so one of the most beautiful concerts for this instrument and I'm convinced that it will be a concert that will bring a lot of audience in the hall. We hope so. And also, another concert in May, also present within the season of the European Radio Union, in which it will be performed a first Romanian audition just a few days after a first absolute audition. I'm talking about a work of the young composer Sebastian Androne Nakanishi, who obtained, within the ICMA awards, an important distinction, that of the composer of the year. It will be a work that Sebastian will write especially for the gala of these awards that will take place in April in Luxembourg and in just a few days, on May 6th, this work can be heard at the Radio Hall, in the concert of the National Orchestra Radio.

Concert that, I guess, will mark May 9th.

Yes. Exactly and we'll also have other landmarks of the season that our listeners, as well as our audience, know very well. I'm talking about the royal concert in May. I'm also talking about the special concerts in December, which mark the winter holidays, the Christmas holidays. We'll have several elements throughout the season, which will also involve the choir. We must also talk about the choir, because in December there will be several appearances of this ensemble. For now, it's very difficult to bring the choir and orchestra on the same stage, precisely for these reasons, of keeping the distance on the stage, so we hope that by December everything will calm down a bit. There will be concerts dedicated to the Easter holidays, as we've had every year. Many things that we've planned. I wouldn't want to talk too much about them now, because I really want them to happen. Maybe it's better not to talk and then them to happen, not as it has been lately. All we have to make sure is that we'll be healthy enough to have a suitable state to make music, to make art and not to forget the Folk Music Orchestra, which will also return to the stage in November with an anniversary concert dedicated to Alexandru Pugna and another concert in December. We're trying to run a season in relatively normal parameters.

And the Children's Radio Choir.

Indeed, the Children's Radio Choir is the ensemble that hasn't even been on the stage of the Radio Hall since March 2020. There have been several appearances at the Enescu Festival, but in a reduced formula. It's problematic, very problematic to bring back now the rehearsals, for now the rehearsals are taking place online. We tried that in September, the children came here to our studios where they usually rehearsed several times a week, by age groups. Unfortunately, the current situation has made us give up. We must first take care of the children and their health, which is why, at this moment, the rehearsals are taking place online. You do realize how hard it is, but at the same time I think you realize, the passion of these children of all ages who are trying to keep the spirit of this choir alive. As you know, in 2020 there had to be an anniversary concert of the children's choir and someone told that they hopped this not to be the end of this ensemble, after such a rich and spectacular history. It will certainly not be the end of this ensemble, because, first of all, all of us here, together with the choir conductor, with the choir pianist Magdalena Faur, will make sure that these children return safely to rehearsals and have concerts, but once again I say, we must be patient and confident that all these moments will be overcame and we must look to the future with hope. I'm convinced that at some point things will return to normal, it depends a lot on us, on all of us, for things to return to normal, but I'm convinced that there will come a time when we'll see each other again in a state of absolute normalcy with all our ensembles.

And I hope that during the next interview in Perpetuum mobile we'll talk about even more concerts, at least in the second part of the 2021-2022 season. Liliana Staicu, thank you for being in the studio.