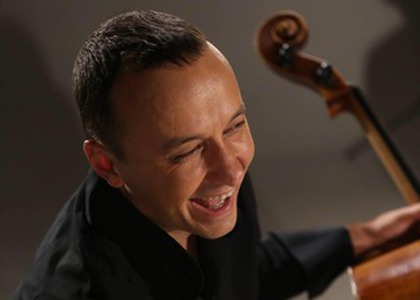 Interview with the violoncellist Răzvan Suma about the Overture Tour

The National Tour "Overture" sustained by the Ensemble PlaCello starts on Monday, 18th of October, with a recital at The Philharmonic "Mihail Jora'' from Bacău. We find out many more information about the organization of this series of events of the itinerary from the violoncellist Răzvan Suma.

At the moment of conception of a musical project, one must think of the unitary title which one has to promote due to the fact that we live in the epoque of promoting, the epoque of advertising and the epoque of likes. I, myself, an old-fashioned one, I do not really care about likes, but I do like for people to understand the term of concept. The concept of overture came to us, and here I'm talking about the Ensemble PlaCello, the ones who are in, Ștefan Cazacu, Mircea Marian si Ella Bokor - nonetheless, there, in the world, where more tours have been done, at the wheel, on the road, where barely a few people bother you, in a moment when you can turn off your phone for a couple of hours, where you can create something and where you can think of all the variants. We started off with two overtures which we got from our collaborators and we are proud of collaborating with them - Boston Cello Quartet, who, from my point of view, is the best ensemble of violoncellos in the world. Blaise Dejardin is the conductor at Boston Symphony, whom we played with in the summer. We have a representant also from Boston Symphony Orchestra, Mihail Jojatu, who is Romanian. They sent us our first two overtures, "The Barber of Seville" and "The Magic Flute". Well, we started off from there… we have more repertoires, and you see, step by step, by adding or ordering some arrangements of any overture because we had already had an idea to begin with, the eight or nine, whatever how many there are, overtures have gathered together.

If we kept on analyzing the program of the tour who had had to be by the end of 2019, it would have been around ten locations. As time has gone by, there are four left : the concert from the 18th of October, Bacau, the 20th of October, Reghin, the 22nd of October Sibiu and the 27th of October, Bucharest, the Radio Room. These one have stayed because we have already been in the other ones. It is called a national tour, but everyone can tell that a national four-locations tour is not what it should be, but we are under a moment of crisis and we must assume things. The choice is very simple: you either do it or you don't!

Last summer, we started a collaboration with a very special association, Association of the Luthier Artists in Romania. We happened to play on the instruments of the luthiers from Reghin. We happened to come across some instruments with an excellent qualitative progress. We then played a quartet and an octet with some very good musicians from Romania. We retake this collaboration when we will perform in Reghin on the 20th of October and we will play on their instruments once again.

It is very important that we have gathered together, the instruments producers, the ones who make them talk and play nicely, and it will be a one-time special moment in Reghin because I firmly believe in this collaboration and I truly believe in the quality of the instruments in Reghin. I think that, recently, the luthiers - generally speaking, not only the Reghin ones, started to open up, they started collaborations not only in the same country, among each other, but international collaborations. I believe that these collaborations have developed the industry of musical instruments at a mondial level and the benefit is extraordinary from our point of view, because we have way better results. And it is also not only a technological progress for them, indeed, but a high quality one.