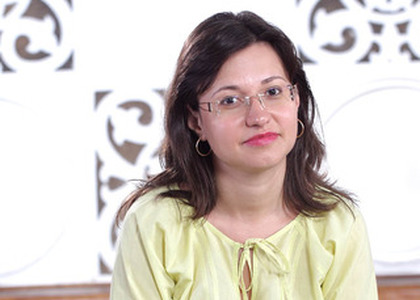 Today, November 2nd, a new site will be launched, casedemuzicieni.ro - a project of the Opus Association co-financed by the Bucharest City Hall through Arcub, within the "Bucharest - open city 2021" Program.

Monica Isăcescu, what will visitors who enter this site find?

They will find a miniature city, a musical city, made up of buildings with stories going for decades or belonging to recent history, which have been inhabited for varying periods of time by important musicians of Bucharest. There are houses with a special atmosphere (in some of them meetings of the intellectual elite took place) or small apartments, which were transformed - in by the occupation of their tenants - into creative houses. Some of them, too few unfortunately, wear plaques whichare drawing the attention of passers-by to tell them thatthere is the space wherea musical personality lived. But, most of the time, these plaques do not exist, so together with the team of the "Houses of Musicians" Project we try to put these houses back on the cultural map of Bucharest - literally. And I didn't use the idea of ​​a city map just as a metaphor; on the website casedemuzicieni.ro there will be a map on which are marked the places where those who went for a walk on the streets of the capital can find the houses where composers, pianists, violinists, musicologists, music critics, conductors, etc., lived. Each of them'scarieerbeing presented on the pages of the site. Also, each house is described from an architectural point of view and I am glad to tell you that there are special buildings, such as the piano house of Aurelia Cionca and the Nottara Home - two spaces designed by the same architect, Victor Ștefănescu - or the Florescu building, where Maria Tănase lived, the blocks of flats where Dimitrie Cuclin and Viorel Cosma had apartments… all these designed by the architect George Damian. The discoveries I am talking about belong to a young architect with whom I am very happy to have collaborated in this project, her name is Andreea Mihaela Chircă, and the descriptions of the houses that will be posted on the site belong to her too.

Also on casedemuzicieni.ro, visitors can read a wonderful article, signed by the daughter of conductor George Georgescu, Mrs. Ioana Georgescu-Răileanu, who financially supported the project with BRD, and some document interviews, unique interviews with the daughters of composers Pascal Bentoiu, AurelStroe - Mrs. Ioana Bentoiu and Raluca Brumariu, respectively with the sister of the composer Tiberiu Olah, Mrs. Edit Gogolac, and with the composer Dan Dediu, from the perspective of a disciple of the master Ștefan Niculescu. From these interviews I learned how the waves of history influenced the choice of homes where the masters lived, what habits they had when composing in these houses, who crossed their threshold, what was the atmosphere… interesting, unknownthings which somehow give life to these houses.

We reconstructed all these elements with the help of a team that included Daniel Ivașcu - graphics and web design, architect drd. Andreea Mihaela Chircă - editor of Iglu magazine, photographer Andra Aron and my fellow musicologists from Radio România Muzical - ȘtefanCostache, my project partner, and the signatories of the texts Ioana Marghita, Larisa Clempuș, Petre Fugaciu and Irina Vasilescu.

It is important to mention that the site will also have an English version, which makes it accessible to tourists passing through the capital, but also to all those interested in the material and spiritual heritage of Bucharest; and the translation was made by our former colleague from Radio România Muzical, Maria Monica Bojin.

How will the launch of the site take place on November 2nd?

Through the partnership we have with the National Museum of Romanian Literature, we are glad that we will be able to mark the launch of the site through an event hosted in the "Anton Pann" Memorial House, located on Anton Pann Street, on the day when there will have been 167 years since the death of the composer, the minstrel singer, the folklore collector Anton Pann. So, tomorrow, at 16.00, we are waiting for you in this special space together with the Imago mundi Band, that will hold a short concert. The event will be broadcast live audio and video on the facebook page of our main media partner, Radio România Muzical, but also on the facebook pages of the House of Musicians and the one of the "Anton Pann" Memorial House.