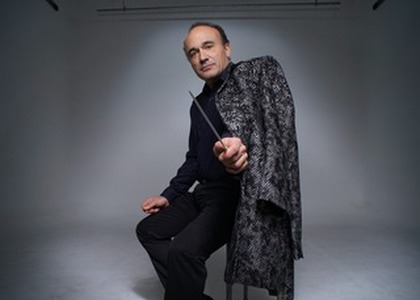 The conductor Frédéric Chaslin is invited again to lead a performance in the current season of the Bucharest National Opera. After conducting, in October 2021, performances with the operas The Marriage of Figaro by Mozart and Aida by Verdi, the famous French artist returns to Bucharest for Faust by Gounod, a production directed by Alexandru Tocilescu, which can be watched on November 20th.

Mr. Chaslin, you have already conducted several times in Romania - you have been invited, for example, on the stage of the Radio Hall, but also to the Enescu Festival. And recently you also appeared in front of the audience at the National Opera in Bucharest, on the occasion of two performances. Did they represent the beginning of your collaboration with this institution?

Yes, to the Opera I have come for the first time. To the Enescu Festival I had come in 1985 too, when I was twenty-something. It was my debut in Romania. So yes, I come to the Bucharest Opera for the first time. And at the end of this week, I will also conduct Faust. It will be our third collaboration in a single month, so I am very happy to discover this orchestra that has a great potential and is very musical. In fact, I always say that Romanians are, in general, great musicians. That's why I really enjoy working in Romania.

The two performances you have already conducted in Bucharest were Mozart's Marriage of Figaro and Verdi's Aida. I know that both the instrumentalists and the soloists from the Bucharest Opera were very enthusiastic to perform under your baton. What was your perspective on these two collaborations?

It was very exciting because I had very little time; however, I had a few rehearsals held, somehow, exceptionally, because normally this Opera works on the model of a repertory theater, where there is a performance every evening, like in Vienna, in Berlin or in Munich, for example. But because I was only then getting to know the orchestra, I was given a rehearsal and then a general rehearsal, so I had the opportunity to work a little. Which was a very important thing, because I could very quickly see what are the possibilities of the orchestra and of the choir. We had a little time to work, but not too much, not as much as would be necessary to achieve perfection, but we managed to achieve a lot thanks to this, almost telepathic, connection, which can be established between the conductor and the orchestra. And the connection between us was very good. There were many things that I explained in words, but also many things that I instinctively conveyed to the musicians, especially during the performances. It was interesting for me to observe that, although many things had not been explained during the rehearsals due to lack of time, they were revealed during the performance, in this space of magical contact; and the connection between us was indeed good. When the contact that is established is not good, I resort to other methods, which I leave you to guess…

How many rehearsals do you now have for the Faust performance?

I did a reading of the score with the orchestra, which lasted four hours, we wanted to go through the whole score. We didn't have time to do everything, but we rehearsed the essential moments, and now we are going to have a general rehearsal. But I am aware that I am given a preferential treatment, because normally this is a performance from the already existing repertoire, for which they do not usually rehearse so much.

Will you perform the opera with all of its five acts or have you chosen a shortened version? Will the audience listen to a grand-opera, with ballet, then?

Yes, we will play everything. I asked to cut a small scene that seems superficial to me, it is not necessary. But otherwise we play everything, including the ballet, especially since at the Bucharest Opera we are lucky to have a very good ballet corps. When I conducted Aida, I found that the dancers are really very good, and now I am happy to do the ballet from Faust, which has a very beautiful music. It is true that sometimes, in the case of certain operas, ballet moments may be cut, but here it would be a shame to do so, because the music is wonderful! So we will have a veritable grand-opera.

Over the years you have conducted Faust performances in several important opera houses - including those in Santa Fe and Venice (La Fenice). What are your expectations regarding this Romanian production by the director Alexandru Tocilescu?

In fact, I am really curious, because I haven't seen this staging yet. It will be exactly the same situation as in the cases of The Marriage of Figaro and Aida - I will discover the directing right during the performance. It is quite funny, because when I conducted Aida here, for example, I spent more time watching the stage than looking at the orchestra. But for Faust we will do the general rehearsal under normal conditions - with scenery, maybe even lights, so maybe I will have a chance to see more in advance. Since I have been in Bucharest, in the last month, I have only had surprises, but pleasant ones, so I am satisfied.