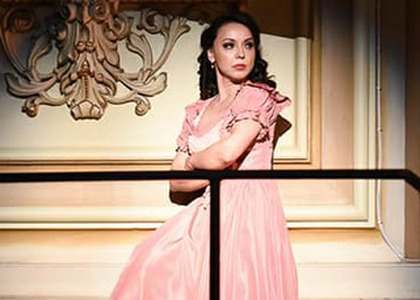 Tonight, the Bucharest National Opera celebrates 100 years since the first show that took place on the institution's stage, presenting the premiere of a new production of Richard Wagner's "Lohengrin" - a title that opened the first season of lyrical theater, the show taking place under the baton of George Enescuat that time.

We find out more details from the soprano Marta Sandu Ofrim:

The centenary of the Bucharest National Opera will be celebrated with the premiere of a new production of the opera "Lohengrin", an event that marks your debut in the role of Elsa. The audience knows you from roles like Adina from "Love Elixir", Susanna from "Figaro's Wedding" or Nedda from "Clowns", just to give a few examples. What is the story behind this debut that I am guessing it also involves a new direction in your repertoire?

It is a new direction that I am now addressing in my repertoire. She started some time ago, as you said, with the role of Nedda, with Donna Anna, with another role of the same bill that I am preparing, namely Margareta from "Faust". I hadn't thought about Elsa, I wasn't sure if this role was for my voice. But reading, feeling, getting acquainted primarily with the Wagnerian style and studying a lot, I discovered that I am Elsa and I discovered Elsa and the valences of my voice due to this role, which I did not discover until now. And I don't think it's a coincidence. I am very grateful, happy and fulfilled because I had and have the opportunity to approach this role.

And how did you approach Wagnerian style?

I've studied a lot, I also had a coach for German and for this Wagnerian style. The singing masters of the National Opera know the score very well, they know this style very well. Also, the conductor TiberiuSoare, who worked with us in detail, and we managed to be compatible with this style and to understand it.

How did you build the role together with the director Silviu Purcărete, the conductor Tiberiu Soare, whom you just mentioned, and your colleagues in the cast?

The story is extraordinary! It is full of symbols, of meanings; is an old legend of the Swan Knight, from the end of the 13th century. Elsa is very well defined by Wagner's vocals through phrases, through the orchestral fabric. From this point of view, it was very clear to me what Elsa was like and who she was. Elsa is a lyrical role; it is perhaps the only lyrical role in Wagnerian works. From the point of view of character construction, Elsa is a personification of high, bright, pure human qualities, she is the one who, fallen in the passion of curiosity like Eve, through the traps and intrigues of Ortrud, makes a mistake that leads to the loss and sacrifice of love. , removing Lohengrin. At the same time, she fulfills her own destiny through this almost Jewish betrayal, because this is the way through which she brings her missing brother, and the Brabantsget another chance. This story gave me a very clear picture of how I could find Elsa in my own personality and in interpreting this typology.

There are only a few hours until the curtain rises and the festive moment. What thoughts and feelings are you having now, after all the hard work for the premiere?

I'm impatient. I believe that the opera "Lohengrin" represents for the National Opera the crossing of certain thresholds and the evolution towards a new dimension of everything that means opera and music, in general, for man and for the public. I will not reveal to you what I will invite you to see in SilviuPurcărete's show, but know that it exceeds any expectation. Through inspiration and directing technique, it renews and, at the same time, preserves the values ​​of the opera performance. It is a privilege to be with my extraordinary colleagues Daniel Magdal, Marius Boloș, Valentin Vasiliu, Dan Indricău, Petra Lang, in the costumes and scenery of DragoșBuhagiar and I can only be impatient, to enjoy it together.