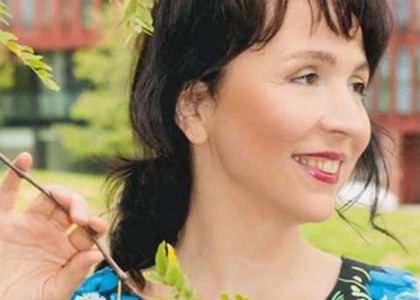 The International Classical Music Awards has published a list of nominees for recording appearances of the year. On the 15th of December we will find out the finalists, and in April 2021 the awards gala will take place. Our radio station is part of the competition jury. Among the nominees, in the Assorted Programs category we find a double CD made by the National Radio Orchestra conducted by Rossen Gergov, the soloist being the pianist Luiza Borac.

We find out more about this nomination and about the works that can be found on this double CD from Luiza Borac, in an interview made by Florica Jalba:

First of all, congratulations on the nomination! We are happy to also have some good news, in this difficult period. A competition, in which Radio Romania Muzical has the privilege of being part of the jury, along with prestigious specialized magazines and European radio stations.

It is a special honor and a great joy for several reasons. First of all, I am glad that this year, Radio Romania Musical was selected to be part of this famous jury, so it is given special attention. After that, I am very happy for the attention paid to the composers present on this double disc of mine, which was nominated for the creations of composers George Enescu and Gyorgy Kurtag and in a very, very special way, the attention, internationally, given to Constantin's works. Silvestri; an undeniably renowned conductor but an unknown composer. George Enescu admired and supported him a lot and Enescu called Silvestri the hope of Romanian music. I am glad that his works were noticed in this context and, of course, I am glad for the nomination of this record, which features, for the first time on record, the unfinished concerto for piano and orchestra by George Enescu. It is a recording, together with the wonderful National Radio Orchestra, from a festive concert last year, on the occasion of Regality Day, with the conductor Rossen Gergov. And last but not least, on this record, most of the works are for the first time discographic. This is also the case of two works by the famous Hungarian composer, Gyorgy Kurtag.

Howdid you decide to select this program?

The desire to bring to light the works of Constantin Silvestri began several years ago. In 2014 I recorded the album "Chants nostalgique", with works by Schubert, Liszt, where there were also historical recordings of the famous tenor Ion Buzea, during the George Enescu Festival. Then I recorded for the first time "Chants nostalgique" by Silvestri and this recording had a very special resonance and I realized that it is something imperative to bring to light these works of great originality. This is how this idea came about, and then, while working on this project, I received from the conductor Peter Ruzicka, the manuscript of the concert by George Enescu, an unfinished concert for piano and orchestra, an extraordinary work. Yes, I keep this concert from last year, in 2019, with the National Radio Orchestra, where this concert was sung and listened to for the first time in the Radio Hall, inside my soul.

How was the collaboration with the National Radio Orchestra, which, we see as being nominated?

The National Radio Orchestra has a very deep place in the soul. It is a highly professional team and, as I tell my students, a professional gives his best, in the most special conditions, which are sometimes lighter or heavier. In 2008, together with this group, we recorded the Schumann concert, in very difficult heat conditions and they were dedicated body and soul to music. And I have a special memory of the recording on this disc; the rehearsal with Enescu's concert took place exactly on my birthday and the orchestra, of course, marked this personal moment in a very beautiful way.