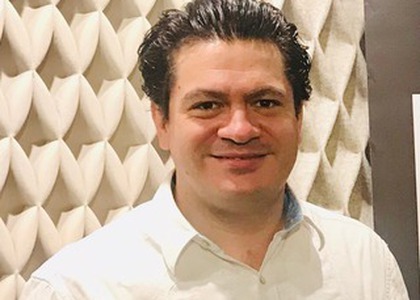 Casa Radio Publishing House brings you a new disc which reunites recordings by Cristian Măcelaru, together with the Romanian Radio National Orchestra. The disccan be listened to at Radio Romania Music, with its official premiere on the 30th of November, 11.30 a.m. The album includes the symphonic Fantasia The Tempest by Tchaikovsky and Symphony No. 7 by Dvořák, recordings from 2014 and 2015, within several live concerts which took place at Sala Radio.

I know that your connection with the Romanian Radio National Orchestra has grown and flourished so well throughout the years. However, I do not know when and how this collaboration has started.

I know that the first concert was with Scheherazade by Rimsky-Korsakov, which is also on the 2012 disc (ed. note also released at Casa Radio Publishing House, in 2016). It was quite an unusual story: Cristina Comandașu (ed note. Radio Romania Music's editor-in-chief back then) was watching the performance and your colleagues were broadcasting a concert in Philadelphia. It was Franz Liszt's anniversary; the Philadelphia Orchestra was performing a piano concert with Lang Lang and Dutoisconducting. I think this happened in 2011. The concert was broadcast around the world, including Romania, and at the end of the concert, among all participants from the credits list, my name made an appearance, as assistant conductor of the Philadelphia Orchestra. And right at the same time, a former school colleague from Timișoara, Noemi Vidu, had begun working with the Romanian Radio National Orchestra. Cristina saw my name and said: "Look, there's a Romanian conductor in Philadephia. How comes he never performed in Romania?" I had never been to Romania to conduct and Noemi said: "I know Cristi, we went to the same school" and that's how I came to Bucharest for the first time. And after that, I kept coming back. Unfortunately, in the past two-three years, this happened more rarely because I do not really have much time, but this is how it all started.

In another interview with a colleague of mine, you were talking about the friendship which was born between you and the musicians of the Romanian Radio National Orchestra. I wanted to ask if you could tell us more about the evolution in time of this both humane and artistic collaboration.

Of course. It's not uncommon, I believe,for a unity between musiciansto always exist. This happens more rarely between the musicians and the conductor, because there is a professional distance, so to say, because of the role each of us plays. But not even once have I regarded my position asconductoras imposing some social limits, not even today. I left Romania very early and never got the chance to study and, so, to make friends at the Conservatory, while being a student. This is why, especially when it comes to Romanian musicians, I have always wanted to know them, to meet them and be friends with them even behind the stage.And this relation was natural, because it was the first orchestra that I have ever conducted. I conducted maybe the most in Romania, the Romanian Radio National Orchestra, and with many musicians from the orchestra, around my own age, I remained in touch. We remained friends and there are many wonderful evenings which resulted from this long-term friendship.

Now about the works from the CD. I know they are live recordings, the symphonic Fantasia The Tempest by Tchaikovsky and Symphony No. 7 by Dvořák, even though you never recorded them within the same concert nor year, but a year away. In fact, there is quite a short period of time which separates one from the other. I checked the numbers and did the math- 12 years. I know it is very important for you to understand what the composer wanted to communicate and I know you are very careful also regarding the knowncompositions and what was lost for the sake of tradition, in their interpretation. So, I wanted to ask you if you discovered such aspects in these two compositions.

For me, particularly Dvořák, has always been a composer in which I have very carefully tried to find his voice, his real voice. In general, more in Dvořák's case than in other composer's, one analyses with an attention based on tradition, which, no disrespect intended, departs a little too much from the score. I have always found Dvořák's music more interesting, when everything he wrote comes to life. For me, Dvořák's symphonies are, in a way, more like Janáček's music than Brahms', because there is an understanding of a music which is fresher and more optimistic and Dvořák is a personality who suffered a lot in his life. He suffered in his personal life, he lost family members. He suffered so much and, yet, his music always had an optimism and love for life that Brahms never had. For Brahms, happiness is melancholic. For Dvořák, happiness is real and this difference has to be remarked especially in Symphony No. 7, which is one of his most dramatic ones. It is a symphony that I just love so much because it is a profound composition and written with so much inspiration. It's like a continuously inspired piece. About the other symphonies, one can clearly see the work behind the composition andtheory, but Symphony No. 7 is even more, perhaps, a more equal combination of an idea, of a direct inspiration, it is poured into what he wrote.

And The Tempest by Tchaikovsky it's a piece that I have discovered very late. It's an extraordinarily beautiful composition. It is not performed often, I do not know why. Maybe because it is a more obscure composition and people do not really understand it, I think. I find this piece really, really interesting. It is a piece that produces very powerful waves of emotion and, because of that, I have always wanted to become a conductor. It is a piece that I often perform. However, truth be told, The Tempest by Tchaikovskydid not have too much tradition to fight against, because there are not many conductors who conduct it. This is the difference.

Tchaikovsky's The Tempest is another reference to Shakespeare's work and this programme needs to be followed. I don't think there are many indications in the score. I know there is this mini-programme, which Tchaikovsky took and followed, but I am not sure about how much of these extra-musical indications are included in the score. I suppose they are not.

No, they are not. But exactly during these times, when the piece was written, there was this tendency, developed especially by Franz Liszt, of a symphonic poem or of the description of a subject, which triumphs not only in space, but in time, too. The same goes for Richard Strauss, this idea of a poem or a musical poem, which merely represents an idea of ​​a geographical point, as Liszt did very often, but is also a representation of an idea. Take, for instance, Don Juan, by Richard Strauss. It is the same idea. It is not something written in the score, but Strauss uses the guide of a poem to describe the composition. The same goes for Tchaikovsky.

I would also like to ask you something else. Once again, I read that for you it is very important to show people the beauty that music can bring into our everyday life with a classical music CD, especially during these difficult times for all of us. Do you think this can give us, perhaps, a smile or a ray of hope, giving that you can't perform?

Yes. I usually think aboutmy childhood, when I discovered music. I remember the first time I discovered Beethoven's Symphony No. 5 and had it on tape. Every day, for months, on the way to school, on the way back from school, I would put on my headphones and listen to Beethoven's Symphony No. 5. And this just transported me into a metaphysical space, where I was with music only. It's true, I was aware of the world around me. I was walking on the street, but the music put me in a virtual space that brought me a series of emotions, which represents only the beauty that music brings.

It is not necessarily just a shallow beauty that makes us happy. No. Beauty itself depends a lot on the full scope of emotions and feelings we understand through music. This is the beauty, as a rainbow passing through the whole spectrum of colours. In the same way, music takes us across the spectrum of feelings and emotions. This world that music can bring into our lives, that can produce in our lives, is a world which puts us in a spiritual reality, in which, the moment we return into reality, we are transformed.And I believe that this is the beauty that a disc can bring into a person's life. The relationship you have with a disc is different from the relationship you have with a live concert or with a concert you hear once. And this is wonderful and essential. But the relationship with a disc is something else. Everyone thinks they have favourite discs, to which they keep coming back like to a friend you still want to meet again and in who, every time you meet him again, you discover something beautiful. You discover a different side of this thing.

I remember that for six months, I only listened to Beethoven's Symphony No. 5, and each time, I could hardly wait for the bits I already knew. I could recognize them, but each time, I seemed to get there a little differently. That difference was whatjust changed me inside. I had a relationship with this disc, with this tape, at that time.

The same I want for this disc, which was experienced and heard live, so it had this experience already, now, as a disc. I hope those who have access to this disc willembraceit as a gift for a friend, in which they can find themselves continuously, to be able to find a very rich branch of all feelings, emotions, through this music. All children, and my children, prefer to watch a movie or a cartoon or to listen to music they already know. It's very normal, very natural, to want to listen to something you already know. When there is a disc, which is beautiful, which we like, which we know will be something that satisfies us, it is very nice to have this friend by your side. Especially now, when access to live music is limited.