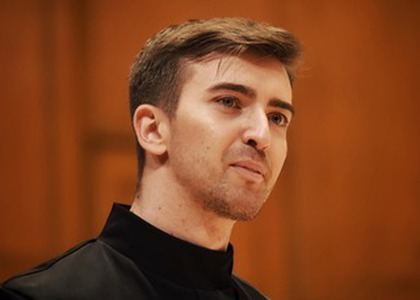 Interview with Răzvan Rădos, the conductor of Radio Children's Choir

Oh, what a joy! Is the title of the newest album of Radio Children's Choir. It was launched this month to the Radio House Publisher.The conductor of the ensemble, Răzvan Rădos has told us about the anniversary disk.

This year we celebrate the anniversary of the Radio Children's Choir, there are 75 since its founding.Although you could not mark this moment with a concert with the ensemble, you prepared an anniversary disk for the audience.Please tell us more about it!

This is true.The Children's Radio Choir was founded in 1945 by the conductor Ion Vanica.We had prepared an anniversary concert in the spring that we hope to be able to hold on the stage of the Radio Hall someday, and to mark this year properly, we happily worked on an anniversary CD, which has appeared in amoment of important celebration and great balance for the Radio Children's Choir, on the 75th anniversary of its establishment.The CD has appeared both as a way to mark this moment, as a tribute to both the four great conductors of the ensemble - I am talking here about Ion Vanica, who founded the Children's Radio Choir, then Elena Vicică, Mrs. Eugenia Văcărescu-Neculaand, last but not least, Mr. Voicu Popescu, the one from whom I took the baton of the Children's Choir - as well as a tribute to the generations of choristers who over the 75 years have succeeded each other in the Children's Radio Choir and,with much effort, they turned into this wonderful school.I am referring here either to choristers who, later, became peaks in music or in other fields - Elena Cotrubaș or Voicu Enăchescu, in theater, Ștefan Bănică, Delia Nartea - or to choristers, to children who later worked inother areas, which we now piously remember and to which we pay homage. Last but not least, the CD also comes as a tribute to the public, to the generations of the public who, for decades, came to the Radio Hall or to the halls where the Children's Radio Choir performed and supported it through applause and sometimes through several kinds of involvement.

We can guess the fact that the selection of the records which compose the album was not so easy considering the ensemble's musical journey during those 75 years of activity. So, how did you come to the final form of the album?

I can say it was rather difficult because, unfortunately, I did not have access to the recording studio to re-record certain things, and because the selection was of a special complexity.You see, we started with works recorded around the '60s, when master Ion Vanica were still at the desk.Then, here are the things recorded by Elena Vicică.You will see that the CD contains the work Oh, what a joy!, which also gives the title of this anniversary CD, or an excerpt from the operetta for children's choir, orchestra, soloists and reciter A story from the woods, marked with Gold in the Fonoteca Radio, whichhad as reciter the great Alexandrina Halic, and at the desk the master Ludovic Bacs. And we finaly have reached, through such a sober and well-interpreted repertoire under the direction of Mrs. Eugenia Văcărescu-Necula, these thematic projects supported by the Radio Children's Choir under the baton of master Voicu Popescu.In the last part of the CD you will see that everything diversifies a lot and acquires bright colors under the influence of either South American or modern music that master Voicu Popescu approached with the latest formulas of the Children's Radio Choir.

How is the activity of the Radio Children's Choir carried out in the current conditions?

In the current conditions, the plan is as follows: to gather material for another CD, we caught the taste for it.And we aim to record another CD as soon as possible.We are currently working on it online, of course.For sure, the effort is two or three times greater than it would have been in the Radio Hall where, anyway, it is not a small one.I will not say the theme of the CD, it will be a surprise, because it is a repertoire long awaited especially by young and very young audiences.But we hope to be able to record this CD as soon as possible.