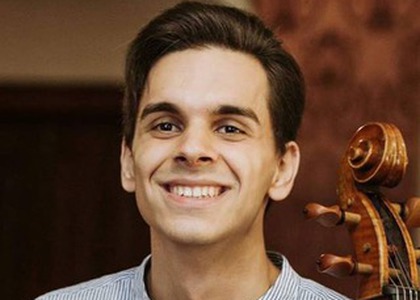 The winner of the 2021 edition of the Musical Romania's Heirs Scholarship, cellist Cornelius Zirbo is, along with pianist Cadmiel Boţac, the protagonist of the first tour organized by Radio România Muzical and Rotary Club Pipera within the Musical Romania's Heirs Scholarship project; the event started on January 8th and will end on January 13th, 2022. For the final concert, which will take place on the stage of the Radio Hall, tickets are already available on the website iabilet.ro.

Cellist Cornelius Zirbo told us more about these concerts in an interview before the start of the tour:

The year 2022 will mark the quarter of a century since the foundation of Radio România Muzical, the only Romanian station dedicated to classical music. A first manifestation meant to celebrate this event will be the tour organized by Radio România Muzical and Rotary Club Pipera within the Musical Romania's Heirs Scholarship project. Along with pianist Cadmiel Boţac, the 2020 winner of the Scholarship, you will perform in Cluj-Napoca, Timişoara and in Bucharest - on the stage of the Radio Hall. You will perform the Sonata in G minor for Cello and Piano, Op. 19 by Sergei Rachmaninoff. What motivated this choice?

First of all, I want to say that Cadmiel and I have a past together. We performed for many years; we had an attempt to make a trio and had a few concerts. Cadmiel, I can say, is one of my best friends. When we received this proposal, we of course thought what repertoire to include in these recitals. We made several song scripts and finally agreed on Liszt's Sonata for piano and Rachmaninoff's Sonata for piano and cello. We thought it was best suited to our personality and to our perspective on music and life in general. We felt that the Romanian audience would fully enjoy these works. They are, anyway, rarely performed; and I'm talking about Rachmaninoff's Sonata, which, indeed, was last performed by Valentin Răduțiu, also during the Musical Romania's Heirs concerts, but it is a very rarely performed work and we thought it appropriate to perform it during these events.

What thoughts are you having now, before this tour set right at the beginning of a new year, which we do not know how will surprise us?

We are very, very excited. Both me and Cadmiel are looking forward to the start of the tour. It was supposed to take place in November, but just then a new pandemic wave had broken out, I don't even know which one… the fourth, and that hindered our tour. And now, when we saw that it was not canceled, it was only postponed and we can perform in January - and we hope nothing else will intervene - for us it is a reason to rejoice, and we are waiting for it with bated breath and preparing. It is also a very good preparation for me, because I will go to an important competition in Pretoria - South Africa, where I will perform Rachmaninoff's Sonata too, so this will be a very good opportunity for me to get acquainted with the piece. I confess that both for me and Cadmiel it is the first time we perform it in public. It is a fresh work for us, but we will perform it with all the joy and emotional commitment.

And in Pretoria, along with whom?

Along with the pianist of the competition. Unfortunately, I will not be with Cadmiel, but the fact that I will be able to perform the piece before the competition is incredible.