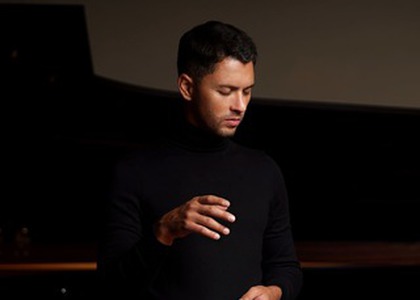 Pianist Eduard Kunz performs a recital entitled "Breath in. Breath out" at Bragadiru Palace, starting at 19.00.

What's the story behind this recital entitled "Breath in. Breath out"?

What's the first thing we all do when we are born? We breathe in. What's the last thing we do when we die - all of us? We breathe out. Opposite actions, so we would say. But these actions put together form the root of all things. Without them, we have nothing to talk about, right? If there is no breath, we have nothing else to talk about. So this coexistence of opposites right at the root of the way we exist - that brings together every single person on this planet. And we are often surprised to see this coexistence of elements in one person or in one piece. I'm not sure why we've been so surprised until now, because they coexist all the time. Take for example Bach's "Ciaconna" that I play, in which the biblical tragedy and the glory of love that embraces us all coexist very comfortably. Take for example the way we perceive works: if you ask people on the street about the Moonlight Sonata, they would probably say it is classical music for relaxation, but it is not! It is one of the darkest and most depressing works Beethoven ever wrote. What can we say about Karmanov's piece - an experience for the audience, 25 minutes of non-stop pulsating harmonies, and it's very hard to tell if it's happy music, or if it's sad music. Is it in minor? Is it in Major? It just simply is. And now I've played this song a few times already with an audience and I'm aware of the possible reactions, some love it and want to go back and listen to it again, and others would say it's maybe a bit too long. Take the two Enescu pieces, for me they are perhaps the most beautiful things he has written for piano, where I see his qualities as a masterful composer. He is so meticulous in the suite form, and so inconsistent in his movements: he moves from one key to another, from one idea to another, like a child who is marvelling at the toys he has around him, and, without finishing one thing, moves on to another, and I as a performer am looking after him and his toys. At the same time, he's such a lonely, mature adult with a huge heart - all of which coexist very comfortably.

It is important to remember that regardless of contradictory actions, the root of it all is to breathe in and out. And that unites all life on planet Earth, including all humans. About Bragadiru Palace I can say that it is a new and wonderful place. It has very good acoustics, which is rare, and it's a relatively large hall, a relatively new venue. It's not a new building, it has history, but it's surprisingly a less-known destination, even for the locals, because activities here have only recently started. It's a very special place, and after these two and a half years that for all of us, even as artists, have been full of challenges, it seemed the perfect place to start something new.

What other projects are on your agenda?

I hope that this project,at the Bragadiru Palace, gets off to a good start. I would love to present ten different programmes in a year, we will see what the audience's reactions are to my concerts and to this relatively new destination for them. There are a few teaching projects that I will hold at the end of the year, in Asia and Europe, namely some masterclasses in Italy, Japan and China. I also have two students who will be entering university, and it's very important for me to finish something I started several years ago - so that will also take time and attention. And, well, my daughter, who is by my side and is also a non-stop project.