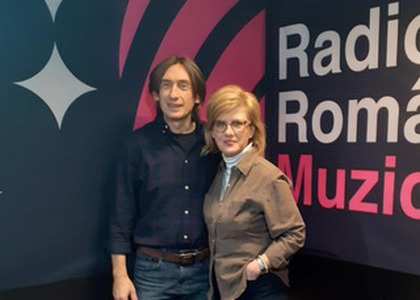 This week’s guest at Perpetuum Mobile, Luminiţa Arvunescu, the president of the Critics, Editors and Musical Creators’ Union from Romania, discussing with Gabriel Marica

Ladies and gentlemen, this evening's guest is none other than our colleague, Lumița Arvunescu, the one that carries out, among many others, the well-known tv show "Opera's night". Apart from her musical journalist duties or, better, in addition to that, she is the president of the Critics, Editors and Musical Creators' Union from Romania. Welcome back to the studio, this time as a guest. How do you feel? Nervous?

L.A: Of course. Good evening, Gabi Marica, thank you so much for inviting me. Indeed, it is a hard task being the president of the Critics, Editors and Musical Creators' Union from Romania, a union that you, as well, are a part of. And I'm saying this for the sole reason that all of us that arethere have well-defined personalities, each with plenty of ideas, but at the same time we manage to work as a whole when it comes to musical events.

It is not your tv shows that we are going to talk about, although it would be an interesting subject, rather I wish us to discuss about the union that you're a leader of, the Critics, Editors and Musical Creators' Union from Romania, which is preparing an event that our audience can listen to at Radio România Muzical, Saturday, 14th of January, from 6 pm. Please tell us about it.

L.A: Indeed, they are going to be able to listen to it live at Radio România Muzical, but also at Radio România Cultural. Hence, the two public radio stations are uniting in favour of our gala. It is the first edition of this gala that we have been working on, alongside a group of our colleagues. We had no more than one month to prepare for it, although we hope that we will be able to create a true music celebration, through which we could reward excellence in both the artistic domain, but also in the journalist and management ones. It will take place Saturday evening, from 6 pm at the Bucharest Palace of Commerce and Industry. I would already like to give my thanks to Mr. Iuliu Stocklosa, president of the Bucharest Palace of Commerce and Industry, which put at our disposal a truly wonderful hall. It is the hall called "Ștefan Burcu", Ștefan Burcu being the architect of this palace, an architectonic monument of great value for Bucharest. The gala rewards excellence for some categories. We have 12 Musicrit prizes, to which we added some excellence prizes and, of course, a trophy made especially for this event, of which I am so proud and I hope that the person who is going to receive it will be as proud as I am, for they have all the reasons in the world. Naturally, the whole event will hold an awards ceremony, but there will also be musical moments hosted by well-known artists, even loved by the Bucharest audience. The artistic moments will have as their protagonists: the violinist Alexandru Tomescu, the violoncellist Andrei Ioniță, the violist Răzvan Popovici and the pianist Cristiana Mihart, the violinist Diana Jipa and the pianist Ștefan Doniga, as well as singers: the sopranos Oana Șerban and Noemi Onucu, the mezzo-soprano Florentina Soare and the baritone David Pogana. Last but not least, the "Violoncelissimo" ensemble will perform on our concert podium. My friend, the journalist Marius Constantinescu, and I will be the hosts. The Critics, Editors and Musical Creators' Union from Romania has been a thing since 1990, that is the year when it was institutionalized and was in fact made up from an already existent group of music critics, who had established the Musical Critics College in 1978. From 1990 they were joined by a significant number of radio-TV creators. Since then, there were awarded excellence prizes. In this way, we are in fact pointing out a tradition, a tradition that has been here since 20 or so years ago, which stopped at a certain point in time. We are bringing back this tradition and we are honoured to do so through these prizes, alongside a new name, Musicrit, with much more impact and, of course, this being well-adapted to the 3rd Millenia.

If we are allowed to step in to the kitchen of this gala for a little while, I would like you to tell us how were the winners chosen, who designated them?

L.A: It comes down to a Senate, made up of certain people, including: Valentina Sandu-Dediu, the Rector of Advanced Studies College "New Europe", Liliana Staicu, manager of Radio România Choruses and Orchestras, Costin Popa, music critic. There have been many nominations, for, I must say, after the pandemic, year 2022 came together with a substantial artistic offer. It was very hard for us to choose. Naturally, some categories weren't such an issue. For example, the one for "The best lyrical season" or "The best symphonic season". Things were crystal clear in this instance.

Could you tell us the name of some winners?

At least for a prize for the whole activity, let's say, if there is such a thing.

L.A: There is an excellence prize for the entire radiophonic activity. And yes, I would wholeheartedly like to say that this prize will be awarded to our dear colleague, Anca Ioana Andriescu. I could also mention that I have created a prize "In memoriam Grigore Constantinescu", since Grigore Constantinescu was the founder president of this Union in 1990, a union that he was the leader of until his death, in 2020. I considered that we must make this reverence and acknowledge the merits of this man that, not coincidently, was the mentor of many of us.

We find ourselves at the beginning of this year and I cannot but ask you, apart from what happens Saturday, what are the project of the Critics, Editors and Musical Creators' Union from Romania?

L.A: There are two projects that we didn't manage to carry out last year, but I will not say anything more, with my whole sincerity, fearing that they will not happen this year as well. There are many conditions to be met. The least that I can say is that this Gala will take place for the first time and I am absolutely honoured, delighted and excited that we are going to make it public live, both on our radio stations, and the Romanian Television, TVR Cultural, will, naturally, make a live transmission.

Luminița Avrunescu, I wish you all the best as the president of this Union, as the organizer of the Musicrit Prizes Gala, the first edition, I wish all the best to the participating artists and I also congratulate the upcoming winners.