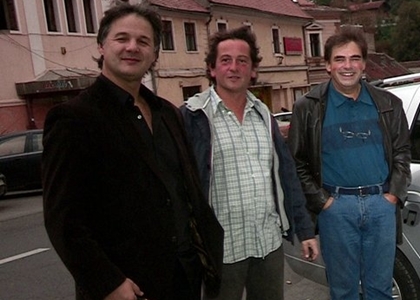 The Start of the 'Violin Duel' National Tour

In the beginning was the idea of a ‘duel’. There were chosen the most valuable weapons, the Stradivarius and Guarneri violins; the combatants, the violinists Liviu Prunaru and Gabriel Croitoru, as well as the arbitrator, the pianist Horia Mihail and the people were told that they would witness a battle of sounds and harmonics. There have been three successful editions of the Violin Duel National Tour so far, and the fourth one starts today, on 4th November, 2014. Further details were given by the three participants to the tour.

It’s a competition which takes place for the fourth consecutive year. Gabriel Croitoru and Liviu Prunaru, what are your thoughts related to the beginning of the 2014 edition of the Violin Duel?

Gabriel Croitoru: As usual, I am very positive about this duel. We’re all a bunch of friends now. Every year we gather together to spend some time, we play, we enjoy ourselves and I believe that the public feels it, that’s why it works.

Liviu Prunaru: Pretty much the same. I’m very happy that we’ve met again for the fourth time. Every time we dig up and find more and more interesting works, such as Piazzolla’s The Four Seasons of Buenos Aires – the two violin and piano version. I think it’s a unique version. It was a happy accident that I got it. I met an Argentinian, a reliable source, and he told me that he had arranged them for two violins and he was very interested. I immediately suggested it to Gabi who was more than pleased. Horia had nothing to say, but to accept it!

Gabriel Croitoru: He arbitrates, as usual!

Liviu Prunaru: We’ll have so much fun again!

Because you are again the arbitrator of the Violin Duel, how did these relationships evolve during the three tournaments that have taken place so far?

Horia Mihail: At first, it was a real duel, but after that they became friends. I have got a surprise for this year. I think I will announce a winner. I haven’t decided yet, but I do have a hunch.

Liviu Prunaru: I’ll leave you then; I’m going to study now! All the best!

So far, the recitals have taken place in full house and audience members were even brought on stage. As far as you know, will it be the same for the fourth tournament?

Gabriel Croitoru: So it seems. It works extremely well everywhere. There are new places we were asked to go to, but, sadly, our schedule doesn’t allow us to. It is difficult to find a balance between the schedule of three persons – each of us have our independence regarding concerts – but still, we try to do as much as we can as better as we can.

This time we have a new event. The Stradivarius and Guarneri violins will perform a duel in front of an orchestra. In such situations, how does a soloist win a duel?

Liviu Prunaru: I suggest that we don’t stray from the subject and remain in the musical field, where there’s no winner, of course, because it’s not about who plays louder or who’s being heard over the orchestra. Surely, it will be a momentary adjustment, we’ll both be careful not to overtake…

Gabriel Croitoru: … and I’m sure that we will both finish at the same time, so as there won’t be any winners.

Liviu Prunaru: That would be ideal!

It is, undoubtedly, an advantage to announce the winner.

Horia Mihail: It was a joke. I won’t announce the winner. Well, I will just nominate him, but I won’t give any names. It will be interesting. For me, even if it’s only early November, this will be my last musical activity this year and I’m glad that I will start the winter holidays under the mood of this tour which will end exactly at that time .

I’d like to ask each of you to deliver/share some thoughts a message to all those who will attend the recitals.

Liviu Prunaru: Speaking of the holidays, I hope  we will finish the tour with a smile, to be glad that we are together, healthy, that we can play these valuable, extraordinary instruments and let everybody be happy!

Gabriel Croitoru: First of all, I wish a pleasant listening to all those who will come to attend our concerts ! I hope they’ll listen to us with the same joy we definitely feel and play, which, I think, can be seen and felt  during our performances. I trust that the public will share this atmosphere to the same extent.

Horia Mihail: My message is for those who only come to events such as this, because there are also people who are more into the story than the music. What I would like to tell you is this: ‘You should attend concerts without a verbal story, as well. Each concert has its story and the music is like an amazing world. It’s for everyone’s sake, to get closer to it.’

The full calendar of the fourth edition of the Violin Duel National Tour can be accessed at the Events section on http://en.romania-muzical.ro/